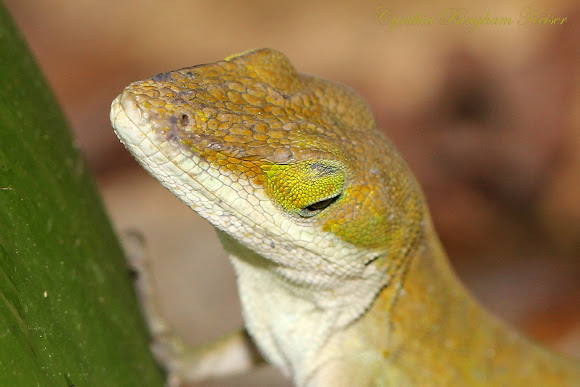 Yellowish-green lizard with white underside. This Anole was checking out a snail. It was so funny to watch it stalk and lick it. After discovering that it was no longer interested, it kept hunting up a tree. "It is also sometimes referred to as the American chameleon due to its ability to change color from several brown hues to bright green. While many kinds of lizards are capable of changing color, anoles are closely related to iguanas and are not true chameleons. The Carolina is a small lizard; male adults are usually 15 cm (5.9 in) long in adulthood, about half of which is its tail, and it can weigh from 3–7 g (0.11–0.25 oz). The color spectrum is a result of three layers of pigment cells or chromatophores: the xanthophores, responsible for the yellow pigmentation; cyanophores, responsible for the blue pigmentation, and melanophores, responsible for the brown and black pigmentation when the background is other than green and the anole changes color to camouflage itself." - Wikipedia

Wild and established in the San Diego Zoo. This is the second spotting of this species wild at the zoo and was near the entrance. "Native to southern and southeastern North America, from South and Central Texas to the Florida Keys and north to North Carolina, and the southern parts of Tennessee, Arkansas, and Oklahoma."

"As of 12/2012 this lizard has not appeared on any California state lists of introduced species. I am adding it now because it is apparently established around the San Diego Zoo in San Diego County. There have been enough sightings that I doubt they are all released pets. Of course, not until juveniles are found will this be confirmed. According to Jones, Lawrence, Rob Lovich, editors. Lizards of the American Southwest: A Photographic Field Guide. Rio Nuevo Publishers, 2009, a population of Green Anoles exists at the San Diego Zoo. They are also well-known from Balboa Park which surrounds the zoo. Personal communications with San Diego County herpers confirms their presence as of fall 2010. There is also a report of Green Anoles inhabiting a park in Carlsbad in San Diego County on FieldherpForum. I have also received information of a sighting of a single anole in the Rancho Carrillo area of Carlsbad. There is a voucher specimen in the Los Angeles County Museum of Natural History collection of a lizard found in Northridge in 1980." - California Herps

That would be fun. I didn't spend enough time in the Bay area to become acclimated. San Diego really is where my heart is

We'll have to meet up the next time you come down here. I'm more of a No Co girl so I'd love to discover your old stomping grounds :)

I loved it when I lived and worked there. The last time we went back, the Strand Theatre was a T shirt shop, the art shop was gone, there was a big boxy starbucks, and our cute little cliffside apartment had been razed and was being turned into a high rise. I remember when it was a "small town" in the midst of San Diego..... oh the stories I can tell!

I am now a confirmed Mission Bay person - which isn't surprising as we went there every weekend when I was a kid.

I hear you about new species. We have been getting many tropical species all the way up here in Oregon.

We love OB! Most likely you're correct on the cause of the species introduction. I love seeing new species here but am worried about the native species.

Back when I lived in San Diego(the little town of Ocean Beach) we had quite the feral colonies of anoles, house geckos, chameleons(Jacksonii), breeding desert tortoises and probably some Tokays too. They all started out as pets, escaped, and finding the temperate beach area to their liking, bred and thirved.

I'm sure the same is true of the anoles in Balboa park.