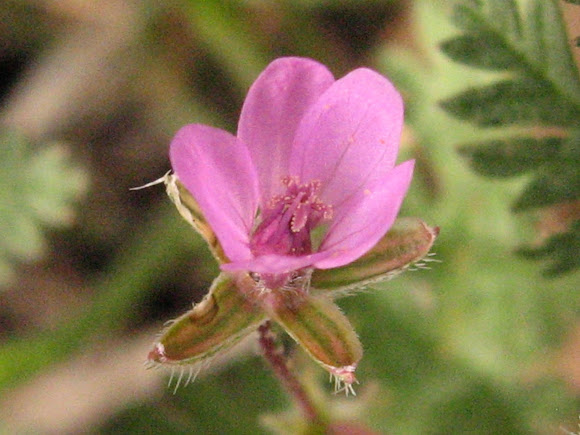 Erodium cicutarium, also known as Redstem filaree, Common Stork's-bill, Pinweed is an herbaceous annual, and in warm climates a biennial member of the Geranium Family of flowering plants. It is native to the Mediterranean Basin and was introduced to North America in the eighteenth century,[2] where it has since become invasive, particularly of the deserts and arid grasslands of the southwestern United States.[3] The seeds of this annual are a species collected by various species of harvester ants.[4] The entire plant is edible with a flavor similar to sharp parsley if picked young. The plant is widespread across North America. The plant grows as an annual in the northern half of North America. In the Southern areas of North America, the plant tends to grow as a biennial with a more erect habit and with much larger leaves, flowers and fruits. It flowers from May until August. It is a hairy, sticky annual. The stems bear bright pink flowers, arranged in loose cluster, and often have dark spots on the bases. The leaves are pinnate and fern-like, and the long seed-pod, shaped very much like the bill of a stork, bursts open in a spiral when ripe, sending the seeds (which have little feathery parachutes attached) into the air. Seed launch is accomplished using a spring mechanism powered by shape changes as the fruits dry [5] . The spiral shape of the awn can unwind during daily changes in humidity, leading to self-burial of the seeds once they are on the ground. The two tasks (springy launch and self-burial) are accomplished with the same tissue (the awn), which is hygroscopically active and warps upon wetting and also gives rise to the draggy hairs on the awn. Common stork's-bill can be found in bare, sandy, grassy places both inland and around the coasts. It is a food plant for the larvae of the Brown Argus butterfly.