European Wall Lizard on the wall ;) 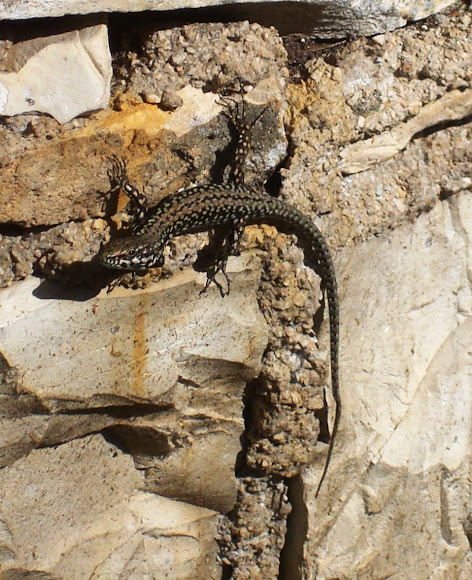 The common wall lizard is a small, thin lizard whose small scales are highly variable in color and pattern. It can grow to about 20 cm in total length. Its coloration is generally brownish or grayish, and may occasionally be tinged with green. In some individuals, the row of spots along their backs may form a line, while others may have a reticulated pattern with dark spots on the side and scattered white spots that can be blue in the shoulder region. The tail is brown, grey or rust in colour, and may also have light bars on the sides. The belly region has six rows of larger rectangular scales that are generally reddish, pink, or orangish. Common wall lizards may also have dark markings on the throat.

:) sth like this, this is by my neighbors on the eastern side that is sunny only in the morning so every morning when I go in the market there is a bunch of them hanging around (but I'm not so lucky to be able to make at least 1 normal photo)...will have to think about some tactics ;)