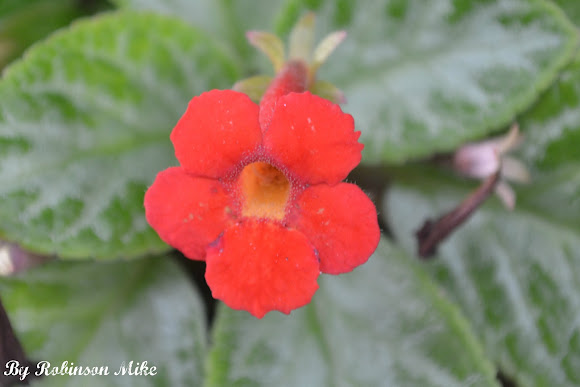 Episcia is a genus of 10 species belonging to the flowering plant family Gesneriaceae. The species are found in the tropical regions of Central America and South America (frequently cultivated elsewhere and sometimes naturalizing in tropical regions). The species are perennial herbaceous plants characterized by a stoloniferous habit, red (rarely orange, pink, blue or yellow) flowers, and frequently have marked or patterned leaves. They are grown in the tropics, and in temperate regions as houseplants, primarily for their attractive foliage. Numerous cultivars have been produced, primarily by selection and hybridization of the species E. cupreata and E. reptans. For much of the Twentieth century Episcia had a broad circumscription but since 1978 has been restricted to a much narrower one, with the genera Paradrymonia, Chrysothemis, Nautilocalyx, and Alsobia separated from it. The segregation of these genera from Episcia has been supported in recent molecular phylogenies.