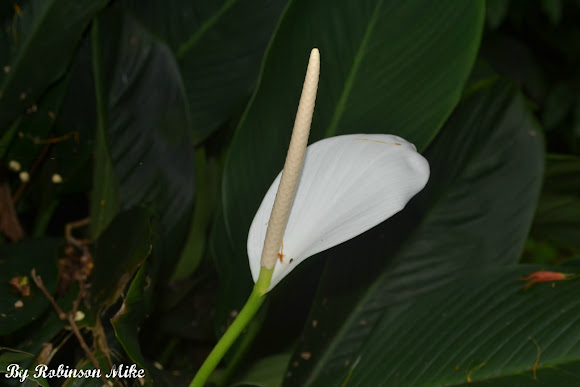 Anthurium flowers are small (about 3 mm) and develop crowded in a spike on a fleshy axis, called a spadix, a characteristic of the Araceae. The flowers on the spadix are often divided sexually with a sterile band separating male from female flowers. This spadix can take on many forms (club-shaped, tapered, spiraled, and globe-shaped) and colors (white, green, purple, red, pink, or a combination). Anthurium inflorescence The spadix is part of an inflorescence, the outer portion of which is known as the spathe. The spathe may be a single color (yellow, green, or white) or possibly multicolored including burgundy and red. That sometimes colorful, solitary spathe is a showy modified bract that can be somewhat leathery in texture. Anthurium grown for the florist trade generally have highly coloured spathes and spadices. There are no flowers on the spathe as is sometimes thought; flowers are found solely on the spadix. The spathe can vary in color from pale green to white, rose, orange or shiny red (such as A. andrenaum). The color changes between the bud stage and the anthesis, (the time the flower expands). Thus the color might change from pale green to reddish purple to reddish brown. The flowers are hermaphrodite, containing male and female flowers. The fruits are usually berries with one to multiple seeds on an infructescence that may be pendant or erect depending on species. Anthurium berries may range in colour from bright red to black, and may also be bicoloured or shaded. The flowers of Anthurium give off a variety of fragrances, each attracting a variety of specific pollinators. All Anthurium flowers are poisonous if eaten.

Anthurium grows in many forms, mostly evergreen, bushy or climbing epiphytes with roots that can hang from the canopy all the way to the floor of the rain forest. There are also many terrestrial forms which are found as understory plants, as well as hemiepiphytic forms. They occur also as lithophytes. Some are only found in association with arboreal ant colonies or growing on rocks in midstream (such as Anthurium amnicola). The stems are short to elongate with a length between 15 and 30 cm. The simple leaves come in many shapes; most leaves are to be found at the end of the stems, although terrestrial plants show less of this pachycaul tendency. Leaves may be spatulate, rounded, or obtusege from leathery to fragile and papery. The leaves are petiolate at the apex. They may be borne erect or spreading in a rosette, with a length that may surpass 100 cm in some of the larger species (such as Anthurium angamarcanum). The upper surface of the leaf may be matte, semiglossy, or fully glossy, and the leaf texture may ran and possess a structure called the geniculum, which is unique to the genus Anthurium. The geniculum allows the plant to swivel its leaves towards the sun, much in the same manner as sunflowers. In drier environments, the leaves can form a bird's-nest shaped rosette that enables the plant to collect falling debris, and thus water and natural fertilizer. Terrestrial growers or epiphytes often have cordate leaves; others grow as vines with rosettes of lanceolate leaves, and still others have many-lobed leaves.

Anthurium (/ænˈθjuːriəm/; Schott, 1829), is a large genus of about 600–800 (possibly 1,000) species of flowering plants, belonging to the arum family (Araceae). Anthurium can also be called "flamingo flower" or "boy flower", both referring to the structure of the spathe and spadix.The Anthurium was discovered in 1876 in Colombia. TROPICOS lists 1901 types, although some of these are duplicates. It is one of the largest and probably the most complex genera of this family; certainly it is one of the most variable. Many species are undoubtedly not yet described and new ones are being found every year. The species has neotropical distribution; mostly in wet tropical mountain forest of Central and South America, but some in semi-arid environments. Most species occur in Panama, Colombia, Brazil, the Guiana Shield and Ecuador. According to the work of noted aroid botanist Dr. Tom Croat of the Missouri Botanical Garden, no members of this genus are indigenous to Asia. Deliberately or accidentally, however, some species have been introduced into Asian rain forests, and have become established there as aliens. As with most Aroids, new plants can be grown by taking stems cuttings with at least two joints. Cuttings can be then rooted in pots of sand and peat moss mixtures. These pots then should be placed in greenhouses with bottom heat of 21°C-24°C (70°F-75°F). During the rooting process they should be kept out of direct sunlight. Once rooted the plants can be transplanted to larger pots or directly outside in milder climates. A second way to propagate Anthurium is to take stem cuttings particularly from trailing varieties and place them in water. In four to five weeks the plant should develop roots and can be transferred to pots. The final method is through direct planting of mature seed or berries.