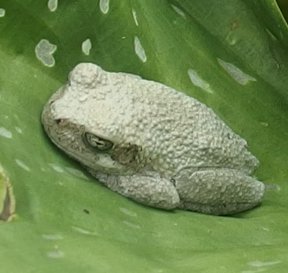 Small frog 2", capable of changing color and mottling from grey to green. It is physically identical to the Eastern Gray Treefrog, the only differences being the calls and the number of chromosomes. Cope's is diploid (2N) with 24 chromosomes and the Eastern Gray is quadroplody (4N) with 48 chromosomes. Cope's is the dominate species in Georgia, I did not count the chirps in the call or the chromosomes, so for identification I'm going by species dominance. I also don't know if this individual was male or female.

This little guy was found trying to hide on a Calla lily leaf. I've no idea what it was doing out of the tree, we live in an Oak-Hickory forest.