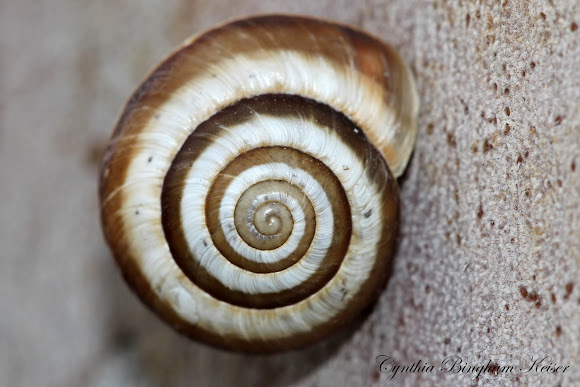 I haven't found a good reference saying that species is here in the states but it matches all photographic images of that species. This snail is brown with a white band on the side. The other side or bottom has brown and white bands with a mottled appearance.

Eucalyptus tree in an industrial park. There were a dozen of them on one tree.

"Cernuella virgata, sometimes called the vineyard snail, is a snail in the family Hygromiidae. Like the other Hygromiid snails it tends to aestivate atop various structures, from plants to fence posts. This habit of aestivating in Hygromiid snails, often on grains, causes significant economic losses due to crop contamination. In 1984, barley shipped from South Australia was rejected by quarantine authorities in Chile because it was contaminated with living C. virgata. It is reported that this rejection cost the Australian Barley Board A$1.3 million in compensation payments. The barley grown for malt was downgraded to feed with a cost comparison of A$130/ton down to A$30/ton. This snail will also climb and feed on new growth causing considerable damage to vines, shrubs, and trees." - oregon state university