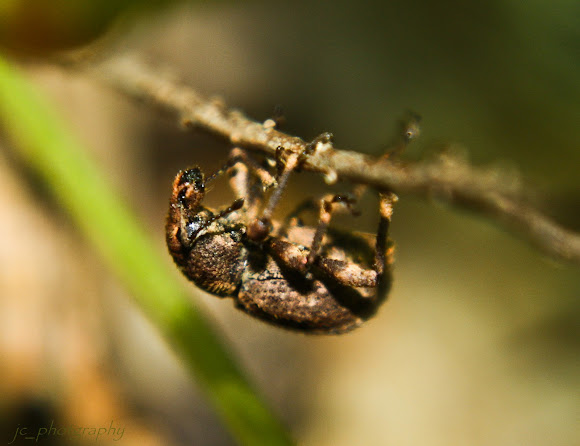 Pales weevil adults are about 3/8-inch long and are dark reddish-brown in color with faint, small, yellowish spots scattered over the wing covers. They have typical snouts and elbowed antennae found on all weevils. Some adults become coated with clay and may appear light tan in color. The white-colored grubs are C-shaped, legless and have brown head capsules. These may be confused with the pine root collar weevil which prefers to breed in living pine trees.

Most pales weevils overwinter as adults in the duff and soil near pines. In early spring, when temperatures begin to get above 50F, the adults begin to feed on the bark of last year's tree stumps or slash residue left from harvest. These adults may also feed on newly planted seedlings or the lower branches of trees. Most of the weevils finish mating and attempt to locate pine slash or stumps which are less than one year old. When suitable material is found, the females begin to eat holes through the bark in which to deposit their 1/16-inch long eggs. These eggs hatch in 10-14 days and the tiny grubs burrow into the cambium. The grubs slowly feed on the wood between the outer bark and sapwood until they are longer. Most grubs are mature by mid-July in Ohio and Pennsylvania. Grubs further south mature earlier and grubs in Canada may take two years to finish feeding. Once mature, the grubs chew into the sapwood and make pupation cells called chip cocoons. These are elongate cells covered with fibrous sawdust. The pupae take about a month to mature into the adults. The adults chew out through the bark and begin to look for live conifers on which to feed. Most of the new adults are feeding from mid-August to early October. As freezing temperatures arrive, the adults seek shelter in the duff or next to stumps and under slash