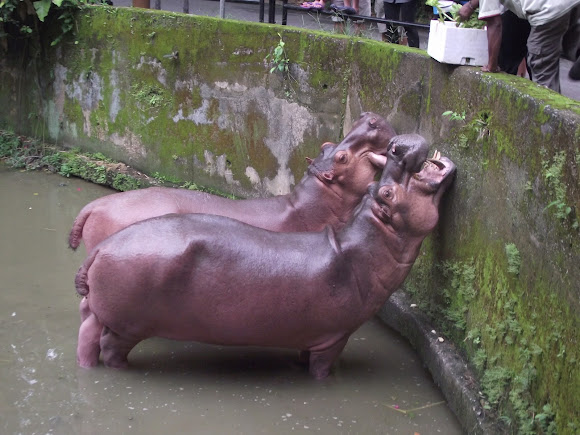 The hippopotamus is a semi-aquatic ungulate -- animal with hoofed feet -- found in sub-Saharan Africa. It lives in lakes and slow-moving rivers surrounded by grasslands. Though the hippo's name translates to "river horse" in Greek, biologists believe it's more closely related to pigs, whales and dolphins. The hippopotamus is the third largest terrestrial mammal; only the elephant and the white rhinoceros are bigger.

You will find a group of Hippos living in the lakes and rivers. Sometimes the groups are very small with only about five members. They can be as large at to have thirty members though. It depends on if there is enough room for their basic needs to be met. They do like to live in deep bodies of water. When they have young, the mothers will often carry them on their backs so that they aren’t so far below the surface of the water to get to air. There are two species of Hippos and they prefer different types of habitat. For the Common Hippo, they live mainly in the Eastern part of Africa around the Sahara. They are the more aggressive type of Hippo and the ones that are often known to be eating the crops that villagers have planted for their own needs.

Physical Description Hippopotamuses measure 10 to 14 feet in length and weigh more than 3 tons. Four webbed toes on each foot support their immense bodies. Their eyes, ears and nostrils are positioned on top of their heads, allowing hippos to remain aware of their surroundings while almost entirely submerged in water. A clear membrane that covers their eyes allows hippos to see underwater. They can also close their nostrils and hold their breath underwater for as long as five minutes. Hippos secrete a red fluid that is often mistaken for blood, but instead protects their skin from the sun. Their hide is gray and thick with very few hairs. A flat tail allows males, or bulls, to mark their territory by flinging and spreading their dung. Diet Hippopotamuses, like all ungulates, are herbivores. More specifically, they're grazers, which means they consume grasses. Hippos feed at night, beginning at sunset, and can graze for more than five hours at a time. They eat approximately 88 pounds of grass -- a fraction of their body weight -- during each feeding session. Hippos can subsist on such relatively small amounts of vegetation due to their mostly sedentary lifestyle. Behavior In order to cope with the heat of the African savanna, hippos spend most of the daytime hours immersed in slow-moving waters. They live in herds of 20 to 30 individuals, each of which has a dominant male, or bull. Hippos are considered one of the most aggressive mammals on Earth. Bulls use their ever-growing canines when fighting each other over territory. Despite their size, hippos can run up to 14 miles an hour, though not for very long.

In addition to previous comments you have 3 different species here. Please refer to our FAQs http://www.projectnoah.org/faq and make this 3 separate spottings with the correct common and scientific name for each one, making sure the categories are correct also.

Nice photo and very good info! Keith is correct, so please can you change the common name to "Hippo" or "Hippopotamus" & move this to the mammals category. Thanks!

were was this taken?

Cool. Was this taken in Ipoh besides who are you.

They are mammals not amphibians