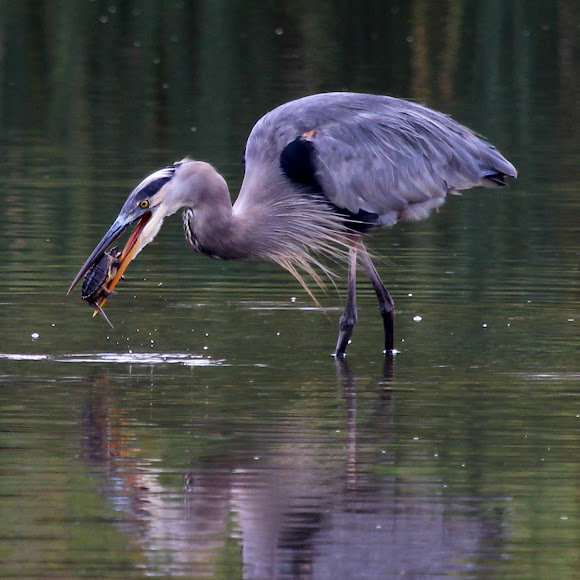 Series: I observed, for nearly 15 minutes, this Great Blue Heron and smaller-sized Snapping Turtle battle it out, if that's what you can call it, in the shallow area of a pond. The heron kept picking it up and dropping it, in what looked to be attempts to get the turtle in just the right position to be able to swallow it whole. However, the turtle, which was at a complete disadvantage, did seem to fight back, snapping at the herons tongue from the end of its long beak (seen in a couple of the photos). Unfortunately for the turtle, the bird's persistence won... and the heron walked away with quite a lump in its long throat (also seen in a photo).

According to the University of Michigan's BioKIDS, http://www.biokids.umich.edu/critters/Ar..., "Great blue herons' diet consists of mainly fish, but also includes frogs, salamanders, lizards, snakes, young birds, small mammals, shrimp, crabs, crayfish, dragonflies, grasshoppers and many aquatic invertebrates. Herons locate their food by sight and usually swallow it whole. Herons have been known to choke on prey that is too large."

Six, remarkable, and amazing photos....each of these six photos, are a masterpiece, of beauty, color, and action....

Congrats Joseph on your SOTW. Swallowing a live snapping turtle makes that heron a whole lot braver than me! ;)

Thank you Ashley and Daniele... and for all the other nice complements.

Congratulation Joseph, this epic series is our undisputed Spotting of the Week!

Simply amazing! huge congrats! That Heron's got some really bad strep throat from what I can tell in the last photo...