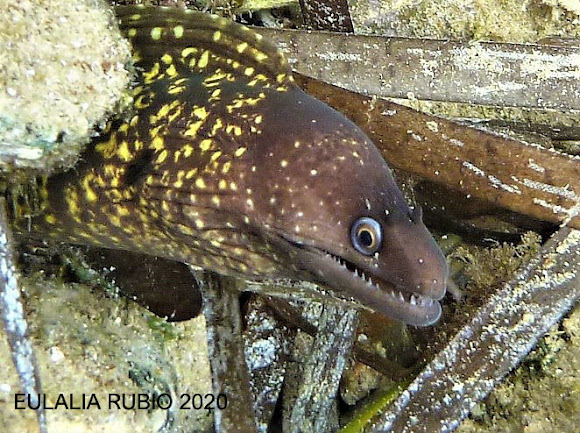 Mediterranean moray eels have an elongated body similar to that of an eel. Its color can vary from gray to dark brown with small specks, its skin is covered by mucus that protects it from any injury to its body without scales and it can weigh more than 15 kilograms. Its dorsal fin begins from its head that continues with its tail fin that is fused with its anal fin. On the other hand, it does not have pectoral or ventral fins. Its mouth is large with powerful teeth and its eyes are small. In fact, their sense of sight is somewhat limited, but they make up for it with an excellent sense of smell and great sensitivity of their lateral line that allows them to detect their prey.

The Murarena helena rest during the day and are most active at night, when they go out hunting. Thus, moray eels are carnivorous and feed on other fish, cephalopods, crustaceans and dead animals. often keep their mouths open, at which point their impressive teeth can be seen. This posture is not usually held as a warning sign, but is because they constantly need to pump water. In fact, they only attack if they feel threatened. In addition, the most dangerous thing about their bite is not their jaw, but the infection that they can generate due to the large amount of bacteria from decomposing food debris that can be found between their teeth.