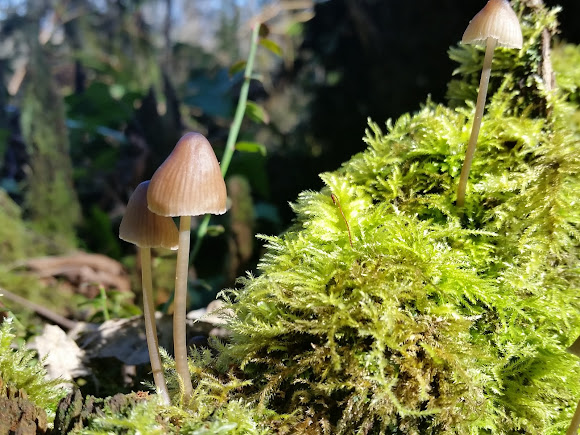 Mycena leptocephala, commonly known as the nitrous bonnet, is a species of fungus in the Mycenaceae family. The mushrooms have conical grayish caps that reach up to 3 cm (1.2 in) in diameter, and thin fragile stems up to 5 cm (2.0 in) long. The gills are gray and distantly spaced. The spores are elliptical, typically measure 7–10 by 4–6 μm, and are white in deposit. When viewed under a light microscope, the gills has abundant spindle-shaped cystidia on the gill edges, but few on the gill faces. The mushroom is found in North America and Asia, where it grows singly or in groups on conifer needles, cones and sticks on the forest floor. It has a distinctive odor of bleach; the edibility is unknown. Similar species include Mycena alcalina, M. austera, and M. brevipes.The cap of M. leptocephala is 1–3 cm (0.4–1.2 in) in diameter, and initially a fat conical shape with the margin pressed close to the stem. As the cap expands, it becomes broadly conic to convex, sometimes broadly bell-shaped, and sometimes convex with a flaring margin. The cap surface has a whitish sheen because of its pruinose coating. The coating gradually sloughs off, leaving the surface smooth and moist. The cap shows radial grooves that outline the position of the gills underneath. Its color is initially dusky brownish-gray to blackish (after the pruinose coating has sloughed off), soon fading from dark to light gray and finally ashy-gray. The flesh is thin and fragile, grayish, and has a slightly sour (acidulous) taste, and a weakly alkaline odor that strengthens in intensity if the flesh is crushed. The gills are narrow, equal in width throughout, ascending-adnate (the gills attach at much less than a right angle, appearing to curve upward toward stem) and toothed. They are subdistantly spaced, with 18–27 gills reaching the stem, and one or two tiers of lamellulae (short gills that do not extend fully from the cap edge to the stem) interspersed between them. The color of the gills is pallid or cinereous, with pallid and even edges. The stem is 4–6 cm (1.6–2.4 in) long, 1–2 mm thick, equal in width throughout, hollow, and very fragile. It is usually bluish-black initially (darker than the cap) but gradually turns sordid brownish-gray, and finally fades to pallid or cinereous. The surface is densely white-pruinose overall, but soon polished and translucent when the pruinose coating wears off. The stem base is nearly smooth to rather densely white-strigose.[12] The species has a distinctive bleach-like odor.[13] Its edibility is currently unknown.[14]-Wikipedia

Mycena leptocephala is a saprobic species,[20] meaning it derives nutrients from the breakdown of organic matter. Fruit bodies are found growing scattered to gregarious on fallen sticks and on needle carpets under conifers, and are rather common during early summer and again in the autumn.[12] Fruit bodies may be infected by the bonnet mold Spinellus fusiger.[21] In North America, the fungus is found in Canada (British Columbia,[22] Manitoba, Nova Scotia), to Washington and south to California and North Carolina.[12] In South America, the mushroom has been collected in Venezuela.[23] It also grows in the Archipelago of the Recherche, off the southern coast of Western Australia.[24] In Europe, it is known from Britain,[10] Finland, The Netherlands,[20] Norway,[8] and Spain[25] It has also been found in various locations in Asia: the Vindhya Range of India;[26] the Gwangneung Forest Museum in the Korea National Arboretum;[27] and the alpine zone of Changbai Mountain Nature Reserve, Jilin Province, China.[28] The fungus is also known from Arctic and Alpine regions such as Iceland, Greenland, and the Murmansk region.-Wikipedia