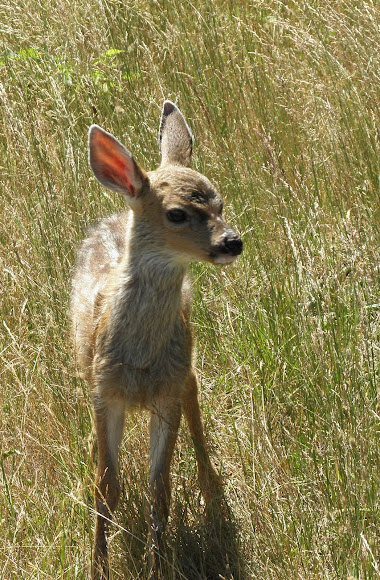 Medium sized deer with characteristics of both the mule and white tailed deer. This baby was quite young for the time of year In Valerius Geist's informative book Mule Deer Country he explains that by testing the mitochondrial DNA (the mothers DNA ) of the three species (blacktail, whitetail and mule deer), researchers have now determined that it was the mating of Whitetail does, and Blacktail buck's, that gave rise to the Mule deer and not the opposite as was once suspected. http://www.blacktailcountry.com/html/blk...

When mama and babies trotted in front of me, I parked and grabbed my camera. Mama took off for the forest with both babies in tow, but a speeding vehicle separated them. Twin one ran across the road, while twin two ducked behind my car(parked on an abandoned driveway). They began mewing at each other and started to get back together(neither could negotiate the hil mama had jumped up) when another car spooked the little guy next to me down the road further. His sibling(solo rear view) managed to get up the bank in the direction of mama. Here's hoping they were reunited via the field between the two driveways! My computer ate one of my better pics somehow

Very cute and the youngest that I have seen thus far

I had one come chasing bugs in the tall grass not far from my window and all I got were pictures of tall grass!

Thank you for your info on the range of the deer. I have seen some deer when I am camping but have never spent any time identifying them. More things to learn! Need more time!

Yes, it was lucky timing. I was watching ducks in a pond and he started singing from the marsh behind me. I took a lot of photos of him while he was facing into the morning sun!

ON another note. I went to your page and could actually see your yellowthroat photo and was derailed for a few moments. I can't get a photo of them to save my life!

Great Spotting Karen. A new species for me. We probably have them here if you have them in Oregon!?