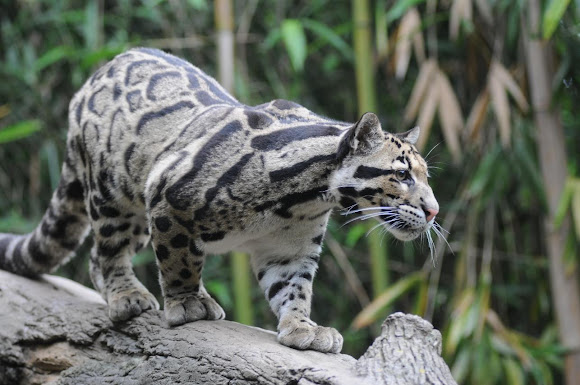 The fur of clouded leopards is of a dark grey or ochreous ground-color, often largely obliterated by black and dark dusky-grey blotched pattern. There are black spots on the head, and the ears are black. Partly fused or broken up stripes run from the corner of the eyes over the cheek, from the corner of the mouth to the neck, and along the nape to the shoulders. Elongated blotches continue down the spine and form a single median stripe on the loins. Two large blotches of dark dusky-grey hair on the side of the shoulders are each emphasized posteriorly by a dark stripe, which passes on to the fore leg and breaks up into irregular spots. The flanks are marked by dark dusky-grey irregular blotches bordered behind by long, oblique irregularly curved or looped stripes. These blotches yielding the clouded pattern suggest the English name of the cat. The underparts and legs are spotted, and the tail is marked by large, irregular, paired spots.

Their irises are usually either greyish-green or brownish-yellow in color. Their legs are short and stout, with broad paws. They have rather short limbs compared to the other big cats, but their hind limbs are longer than their front limbs to allow for increased jumping and leaping capabilities. Their ulnae and radii are not fused, which also contributed to a greater range of motion when climbing trees and stalking prey. (information from Wikipedia)

There eyes are facsinating.

I've been traveling and just realized this was featured as a Project Noah "Fun Fact" post on the Facebook page. Thanks a bunch!! :-)

I'd love to see one of these awesome felids!!!

Fun fact! Clouded leopards are excellent climbers, and can even hang upside down from large branches, using their large paws and sharp claws to secure a good grip. Little is known about these elusive cats’ behavior in the wild, and though researchers have been unable to estimate their population sizes, they are considered a vulnerable species.

great info of a beautiful mammal.

what a superb cat and those feet !!!
thanks for sharing

Thanks for the kind words. Of course, I wish this were a wild spotting. :-) The lighting was poor but luckily, the cat sat still enough for me to use a slower shutter speed.

Wow magnificent cat. Amazing pattern. I sure would like to see this in the flesh.