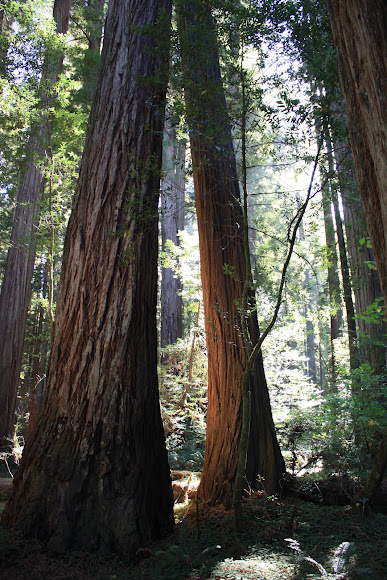 The coast redwood has a conical crown, with horizontal to slightly drooping branches. The bark is very thick, up to 30 cm (12 in), and quite soft and fibrous, with a bright red-brown color when freshly exposed (hence the name redwood), weathering darker. The root system is composed of shallow, wide-spreading lateral roots. The leaves are variable, being 15–25 mm (0.59–0.98 in) long and flat on young trees and shaded shoots in the lower crown of old trees, and scale-like, 5–10 mm (0.20–0.39 in) long on shoots in full sun in the upper crown of older trees, with a full range of transition between the two extremes. They are dark green above, and with two blue-white stomatal bands below. Leaf arrangement is spiral, but the larger shade leaves are twisted at the base to lie in a flat plane for maximum light capture. The species is monoecious, with pollen and seed cones on the same plant. The seed cones are ovoid, 15–32 millimetres (0.59–1.3 in) long, with 15–25 spirally arranged scales; pollination is in late winter with maturation about 8–9 months after. Each cone scale bears three to seven seeds, each seed 3–4 millimetres (0.12–0.16 in) long and 0.5 millimetres (0.020 in) broad, with two wings 1 millimetre (0.039 in) wide. The seeds are released when the cone scales dry out and open at maturity. The pollen cones are oval, 4–6 millimetres (0.16–0.24 in) long. Its genetic makeup is unusual among conifers, being a hexaploid (6n) and possibly allopolyploid (AAAABB).[4] The mitochondrial genome of the redwood is paternally inherited (unlike that of other conifers)

Coast redwoods occupy a narrow strip of land approximately 750 km (470 mi) in length and 8–75 km (5–47 mi) in width along the Pacific coast of North America; the most southerly grove is in Monterey County, California, and the most northerly groves are in extreme southwestern Oregon. The elevation range is mostly from 30–750 metres (98–2,460 ft) above sea level, occasionally down to 0 and up to 920 m (about 3,000 feet).[6] They usually grow in the mountains where precipitation from the incoming moisture off the ocean is greater. The tallest and oldest trees are found in deep valleys and gullies, where year-round streams can flow, and fog drip is regular. It was also much harder to get equipment down in these gullies to log them, saving some of the larger specimens. The trees above the fog layer, above about 700 metres (2,300 ft), are shorter and smaller due to the drier, windier, and colder conditions. In addition, tanoak, pine and Douglas-fir often crowd out redwoods at these elevations. Few redwoods grow close to the ocean, due to intense salt spray, sand and wind. Coalescence of coastal fog accounts for a considerable part of the trees' water needs.[7] The northern boundary of its range is marked by two groves on the Chetco River on the western fringe of the Klamath Mountains, 25 km (15 mi) north of the California-Oregon border. The largest (and tallest) populations are in Redwood National and State Parks (Del Norte and Humboldt Counties) and Humboldt Redwoods State Park (Humboldt County, California), with the majority located in the much larger Humboldt County. The southern boundary of its range is the Los Padres National Forest's Silver Peak Wilderness in the Santa Lucia Mountains of the Big Sur area of Monterey County, California. The southernmost grove is in the Southern Redwood Botanical Area, just north of the national forest's Salmon Creek trailhead.[8] This native area provides a unique environment with heavy seasonal rains (2,500 millimetres (98 in) annually). Cool coastal air and fog drip keep this forest consistently damp year round. Several factors, including the heavy rainfall, create a soil with fewer nutrients than the trees need, causing them to depend heavily on the entire biotic community of the forest, and complete recycling of the trees when dead. This forest community includes coast Douglas-fir, western hemlock, tanoak, Pacific madrone, and other trees, along with a wide variety of ferns, redwood sorrel, mosses and mushrooms. Redwood forests provide habitat for a variety of mammals, birds, reptiles, and amphibians. Old-growth redwood stands provide habitat for the federally threatened spotted owl and the California-endangered marbled murrelet. The thick, tannin-rich bark, combined with foliage starting high above the ground provides good protection from both fire and insect damage, contributing to the coast redwood's longevity. The oldest known specimen is about 2,200 years old;[9] many others in the wild exceed 600 years. The numerous claims of older trees are incorrect.[9] Because of their seemingly timeless lifespans, coast redwoods were deemed the "everlasting redwood" at the turn of the century; in Latin, "sempervirens" means "ever green" or "everlasting". Redwood must endure fire to attain such great ages, so this species has many fire-resistant characteristics. In addition, fires appear to actually benefit redwoods by causing substantial mortality in competing species while having only minor effects on redwood. One recent study, the first to compare postwildfire survival and regeneration of redwood and associated species, concluded fires of all severity increase the relative abundance of redwood and higher-severity fires provide the greatest benefit.[10] The prehistoric fossil range of the genus is considerably greater, with a subcosmopolitan distribution including Europe and Asia until about 5 million years ago.