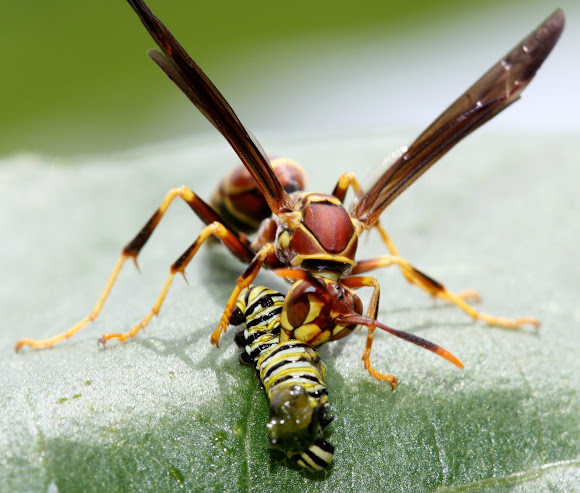 The name "paper wasps" typically refers to members of the vespid subfamily Polistinae, though it often colloquially includes members of the subfamilies Vespinae (hornets and yellowjackets) and Stenogastrinae, which also make nests out of paper. Twenty-two species of Polistes paper wasps have been identified in North America and approximately 300 species have been identified worldwide. The Old World tribe Ropalidiini contains another 300 species, and the neotropical tribes Epiponini and Mischocyttarini each contain over 250 more, so the total number of true paper wasps worldwide is about 1100 species, nearly half of which can be found in the neotropics.

The nests of most true paper wasps are characterized by having open combs with cells for brood rearing, and a 'petiole', or constricted stalk, that anchors the nest (see image, right).[3] Paper wasps secrete a chemical which repels ants, which they spread around the base of the anchor to prevent the loss of eggs or brood. Most social wasps of the family Vespidae make nests from paper, but some stenogastrine species, such as Liostenogaster flavolineata, use mud. A small group of eusocial crabronid wasps, of the genus Microstigmus (the only eusocial wasps outside the family Vespidae), also construct nests out of chewed plant fibers, though the nest consistency is quite different from those of true paper wasps, due to the absence of wood fibers, and the use of silk to bind the fibers.[4] Nests can be found in sheltered areas, such as the eaves of a house, the branches of a tree, or on the end of an open pipe (for example, of an old clothesline

Paper wasp on a spider lily leaf - they are considered beneficial by gardeners. Most wasps are beneficial in their natural habitat, and are critically important in natural biocontrol.[3] Paper wasps feed on nectar, and other insects, including caterpillars, flies, and beetle larvae. Because they are a known pollinator and their diet of known garden pests, paper wasps are often considered to be beneficial by gardeners pillar it was eating We saw this this wasp snatch the caterpillar and eat, never saw anything like it before, crazy sight

Thanks, Was kinda gross, but interesting too, glad I got some pictures

Thanks I updated the info , Thanks everyone for your help

I thought so too, but it didnt look like any of the ones being shown, but if we all think its a paper wasp then I will go with it. Thanks

It's a paper wasp- Polistes species.

yes I know what the caterpillar is, it was on my milkweed and I had about 12, until Mr.Wasp and family came along

I think the caterpillar is a Monarch butterfly caterpillar (Danaus plexippus).
Now, that wasp I don't know what it is but it's absolutely incredible.

Thanks, I have some other pictures of these wasp, they are very photogenic even when eating a sweet caterpillar, lol