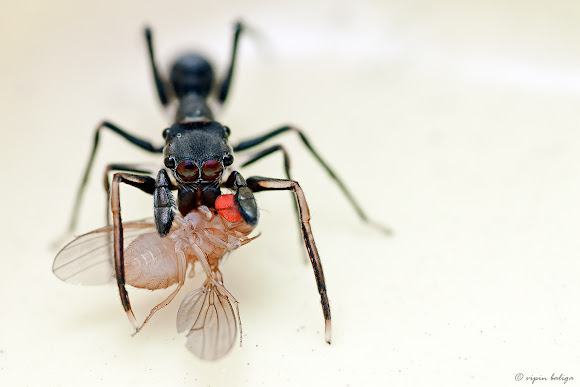 I was observing this tiny Ant mimic jumping spider for a few minutes. At first I thought she was an Ant, but on closer inspection she revealed her true identity. An Ant mimic jumping spider. She was trying to prey on fruit flies which were abundant on a piece of guava at my home. A few of them escaped, but the spider manged to capture and kill this plump looking fruit fly. The life and death struggle for this fly lasted a good minute or so, it was struggling and beating its wings for an unusually long time in the jaws of the spider while it was parading all over a utensil :-) .From my experience a spider venom should have paralyzed the victim much quicker. Maybe the large size of the prey in relation to the spider delayed the paralysis? I am not sure. After the prey eventually succumbed the Spider feasted on it for a few minutes before discarding the empty exoskeleton and moving on. Size: 6mm approx

Magnificent observation and hence the shot !