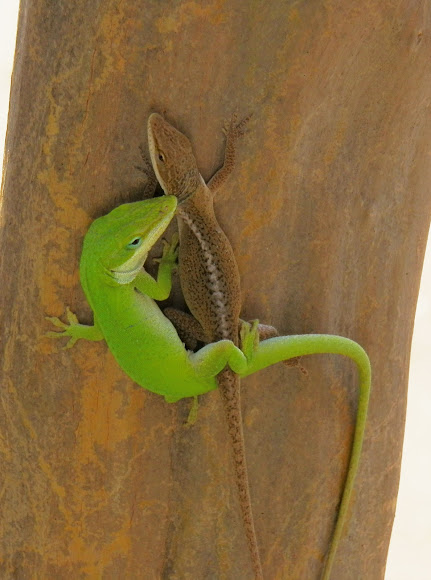 Mating pair of green anoles while in different color phases. Note that male is actually biting the female's neck to stay in place. As anoles can change color between green and brown to match their surroundings, I thought it really interesting that there were two in the same photo here in different colors. The male seemed to be a bit larger, maybe 5-6" in total length including the tail. He is completely green with a lighter belly and no dorsal markings, just a solid field of green (until he decides to change colors). The female is slightly shorter than the male, maybe about 4-5". As seen in the picture she is speckled brown here, with a light tan line running down her spine and darker speckles along the edge. If we could see her belly it would also be a lighter shade.

These guys live in crepe myrtles, jasmine, and other landscaping around buildings. I'm sure they inhabit other areas, but they seem to thrive there as a result of the availability of food in the form of insects drawn by lights at night, as well as the relative safety provided since many would be predators are frightened off by regular human presence as well.

Apparently, many to most females have a light colored mid-dorsal line down their backs. However, juveniles of both sexes purportedly have with them, while many to most males outgrow this as they get older. However, it is not impossible for males to retain this line or females to lose it. At least that's what I've read.