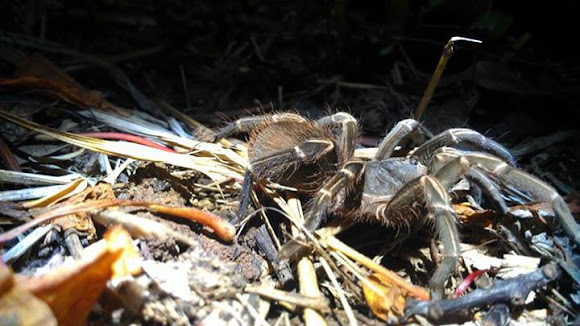 The Common Puerto Rican Brown Tarantula is a nocturnal predator, killing its prey by injecting venom with its long, black fangs. It typically waits patiently at the entrance to its burrow to ambush prey. Almost blind, it has sensitive hairs that enable it to sense the vibration caused by movement to determine the size and location of a potential victim. Its prey consists of insects and occasionally small animals such as frogs. After consuming its prey Cyrtopholis portoricae cleans itself by rubbing its legs together and over its body to remove scraps and debris, finishing its clean-up by licking its legs and the tips of its pedipalps (short, leg-like appendages near the mouth parts.) The Common Puerto Rican Brown Tarantula female may live up to 5 years, while the male typically survives only 1 to 1.5 years. After a short gestation period, impregnated females will deposit 50 to 100 eggs in a silken egg-sac and guard it for up to 7 weeks. The spiderlings remain in the nest for a brief time after hatching and then disperse.

Cyrtopholis portoricae live in burrows that they dig by themselves, occasionally using holes abandoned by rodent or other small burrowing animals. Burrow entrances are lined with silk for concealment.