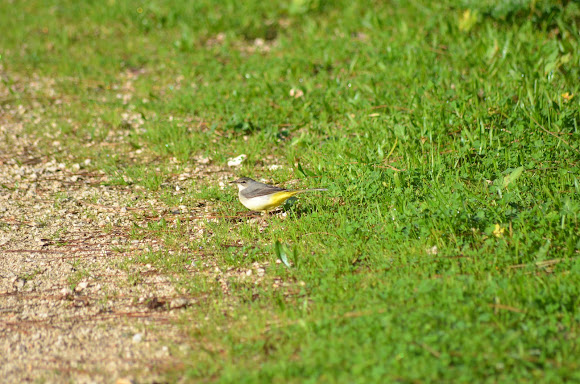 This slim wagtail has a narrow white supercilium and a broken eye ring. The upperparts are grey and the yellow vent contrasting with whitish underparts makes it distinctive. The breeding male has a black throat that is edged by whitish moustachial stripes. They forage singly or in pairs on meadows or on shallow water marshes. They also use rocks in water and will often perch on trees. They have a clear sharp call note and the song consists of trills.

The bird is widely distributed across the Palearctic region with several well marked populations. The nominate form (includes caspica of Iran, Turkey and the Caucasus) is from western Europe including the British Isles, Scandinavia and Mediterranean region. Race melanope, which is not well separated from the nominate subspecies, is described as the population breeding in eastern Europe and central Asia mainly along the mountain chains of the Urals, Tien Shan and along the Himalayas.They winter in Africa and Asia. Race robusta breeds along the northeastern parts of Asia in Siberia extending to Korea and Japan. These winter in Southeast Asia. Island forms include patriciae of the Azores, schmitzi of Madeira and canariensis of the Canary Islands. They sometimes occur on the islands to the West of Alaska but have been known to occur further south in California as a vagrant