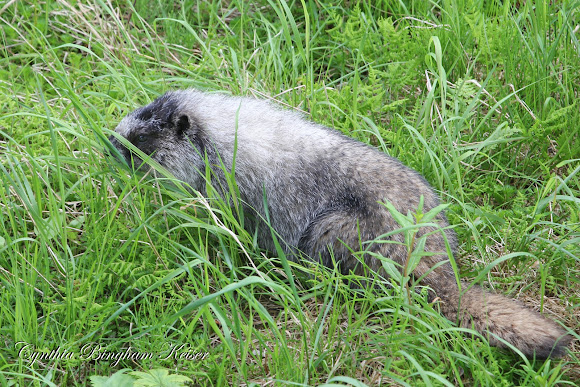 "The largest members of the squirrel family (Sciuridae) in North America, adult hoary marmots weigh 10 pounds (4.5 kg) or more and may exceed 30 inches (76 cm) in total length. The animal attains their maximum weight in late summer, when they accumulate thick layers of fat that will sustain them through winter hibernation. Body shape is similar to the Alaska marmot with their head short and broad, legs short, ears small and round, body thickset, tail densely furred, and front paws clawed for digging burrows. Hoary marmots are predominantly gray with a darker lower back and face and a dark, reddish tail. The hoary marmot has a white patch above its nose and usually has dark brown feet, resulting in the Latin name caligata, meaning “booted.” The pelage color of marmots is adapted to help them blend with the lichen-colored rocks or rusty-brown soil of their surroundings. Marmot coloration varies, and there is a small population of black marmots – melanistic marmots – in Glacier Bay (and in the Tetons of Wyoming as well). "

Seen from tram ride to the top of a mountain. "The hoary marmot is found in alpine areas across most of Alaska south of the Yukon River and occurs down to sea level along areas of the coast where suitable habitat exists."

" True hibernators, marmots enter a state of torpor in winter during which body temperature and all bodily functions are reduced. Hoary marmots hibernate alone in the same burrows in which they spent the summer. Marmots are most active in early morning and late afternoon, although they may leave their burrows during other daylight hours. Marmots need wind to control mosquito levels and rarely venture out on calm days. The Hoary marmot marks its territory by rubbing its face and glands on rocks and along trails."

:) I was excited to get these shots from the tram. The last image is looking at it from right above.

Nice marmot! she indeed has a sleepy face! :-)