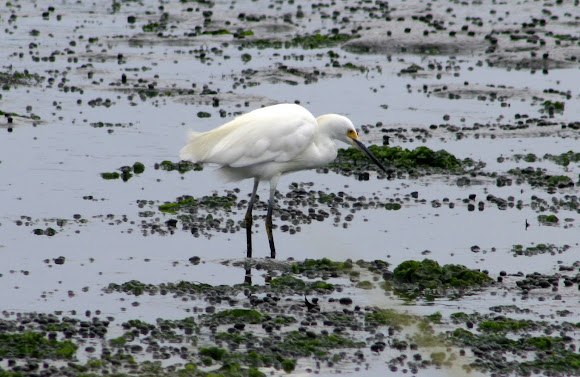 Adults are typically 61 cm (24 in) long and weigh 375 g (0.827 lb) They have a slim black bill and long black legs with yellow feet. The area of the upper bill, in front of the eyes, is yellow but turns red during the breeding season, when the adults also gain recurved plumes on the back, making for a "shaggy" effect. The juvenile looks similar to the adult, but the base of the bill is paler, and a green or yellow line runs down the back of the legs.

Their breeding habitat is large inland and coastal wetlands from the lower Great Lakes and southwestern United States to South America. The breeding range in eastern North America extends along the Atlantic and Gulf Coasts from Maine to Texas, and inland along major rivers and lakes. I saw this one in Milford, CT at the Audubon center.

Thanks Liam and GeoffreyPalmer for help with ID!

I agree with Liam that this is a Snowy Egret. The legs of a Snowy are normally black with the feet being yellow. The feeding posture and bill is also right for a Snowy.

Thanks Liam and GeoffreyPalmer for help with ID. I am trying to figure out if this is a Snowy Egret or Great Egret. It's beak looks more like a Snowy Egret in color, but the feet (unless they are just dark from being covered in mud) appear black, like a Great Egret. I have updated the spotting with a picture including a view of one foot.