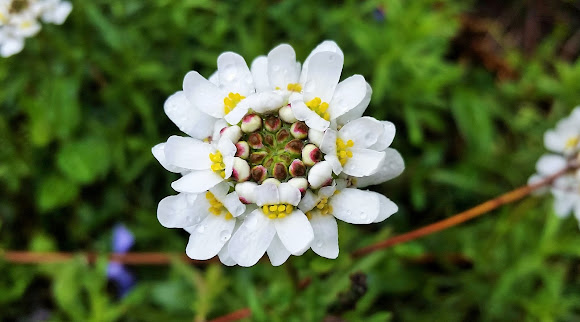 Several of these complex looking flowers growing in clusters. This is an evergreen plant native to southern Europe, often used as ground cover.

Spotted growing on a cut bank in an urban area next to a road.

Evergreen candytuft is a species of flowering plant in the family Brassicaceae, native to southern Europe. It is a spreading subshrub growing to 30 cm (12 in) high by 40 cm (16 in) broad. As an ornamental plant it is a spring-blooming favourite, often seen cascading over rocks and walls, or used as groundcover. The glossy, evergreen foliage forms a billowing mound, with many fragrant, pure white flowers for several weeks during spring and early summer. When grown in a garden it may require light pruning right after blooming, but otherwise plants can be left alone in fall and early spring. It is drought-tolerant once established. It prefers a well-drained site, so heavy clay soils that stay wet in winter should be avoided. It is not easily divided.(Wikipedia)

You are welcome, Brian!!

Thank you very much Sarah.