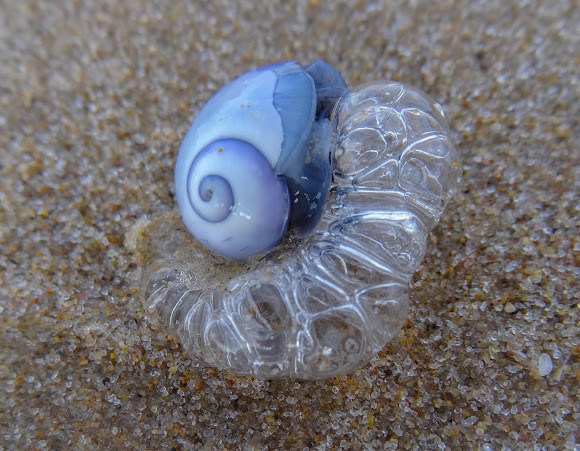 A small blue snail with a firm bubble-like body. It was flushed up on the beach and seemed to be alive.

The violet snail is a marine gastropod that spends its whole life drifting on the ocean surface in warm seas, floating on a bubble raft of its own making. It feeds on jellyfish, such as the By-the-wind-sailor, Velalla velalla, or the Portuguese man-o-war, Physalia physalis. It starts life as a male and becomes female over time. The violet snail, Janthina janthina, also known as the violet shell snail and purple bubble raft snail, is holopelagic, meaning it spends its entire life cycle on the open sea. It secrets mucus from its foot which binds bubbles together in a raft, on which it floats freely on the ocean, in equatorial and temperate waters. Its shell is 3-4 cm in size, light and fragile, and is a dark purple at the widest part, fading to a light purple at the narrow top. Its body ranges from dark purple to black. Violet snails are protandric hermaphrodites, meaning they are born male and develop into females over time. Fertilization is internal, but males lack a penis, so there is no direct mating. Instead, the males release their sperm into a case that drifts to a female, where the sperm fertilizes the eggs. The eggs develop internally and are born live, with the tiny purple snails immediately able to build their own rafts. They use their feet to agitate the water, creating bubbles, which they bind together with mucus. If the bubble raft ever breaks apart, the snail will sink into the ocean and die. Violet snails are preyed upon by fish, birds, sea turtles, other molluscs and nudibranchs. The snails sometimes have pelagic barnacles attached to their shell as hitchhikers. Taxonomically, violet snails are classified as Phylum Mollusca, Class Gastropoda, Order Neotaenioglossa, Family Janthinidae, Genus Janthina, Species Janthina janthina.

Thank you Gilma :) And it is always nice when someone finds the information useful and I love to learn about the specimens I find... This is as close as I will ever come to be a "private investigator" haha!

Aha, I did not know you were from SA :) Lucky you, you have such beautiful nature there all year round...

No I was speaking about when I'm at home is SA :)

What a beautiful creature!! And thank you for the information, Tiz.

Thank you Staccyh! Do you see them up in UK or down in SA? They are odd :)

Tiz, this is another example of nature's ability to amaze! Nice shot

Nice photos Tiz! Great info as well.. I always see these on the beach and now I know a bit more about them :)

Again, a huge thanks to all of you who commented on this spotting. I wish you all a great day!

Congrats Tiz on your amazing SOTD!

What a fascinating little creature & so beautiful too. Congratulations Tiz on your SOTD :)

This is very unique. Lovely blue. Lovely series. Congratulations on your recognition of SOTD!!!

Congratulations Tina ! What a spectacular spotting you are sharing with this..And very nice information too:) Am very happy for you :)

You have a very beautiful collection of spottings and we are glad that you are sharing what you see with us here in Project Noah :-)

A humble thanks to all of you that commented on this spotting. I have to admit that all the greetings are a bit overwhelming :) but it also motivates me to continue to contribute and love the world that we all contribute to! A am a fan of all of you who contributes to the existence of this community!

Congratulations on your SOTD - very interesting!

Congratulations Tina. Loved this snail. I learned something new. Maybe people in Mozambique and other locations of your spottigns in Africa, may not have a camera, record the fauna and participate in Noah. So as many people in PN, you're doing a good job. Love all your spottings. From her fan. :)

CONGRATULATIONS TIZ on SOTD! And thanks for the wonderful information.

Congratulations! It is truly beautiful.

and 63 other people favorited this spotting