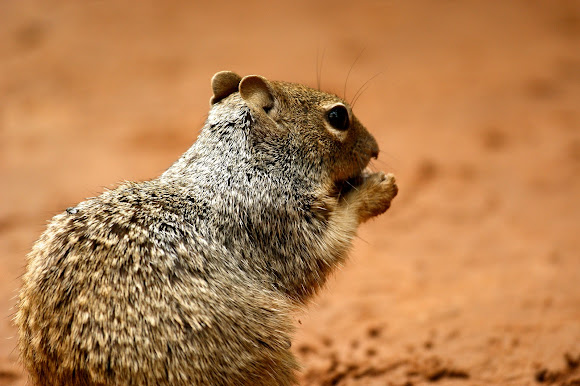 Squirrels are generally small animals. Squirrels typically have slender bodies with bushy tails and large eyes. Their fur is generally soft and silky, although much thicker in some species than others. The color of squirrels is highly variable between and often even within species.

Squirrels are indigenous to the Americas, Eurasia, and Africa, and have been introduced to Australia. Squirrels live in almost every habitat from tropical rainforest to semiarid desert, avoiding only the high polar regions and the driest of deserts. They are predominantly herbivorous, subsisting on seeds and nuts, but many will eat insects and even small vertebrates.

I think it's a Rock squirrel, but would like a second opinion.

Thank you for the confirmation JamesHart !

I think you're right