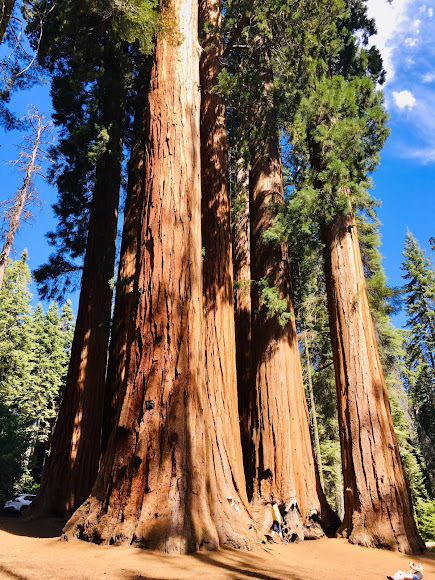 Natural range of the giant sequoia is a narrow band along the western slopes of the Sierra Nevada range, California, USA. The tree grows at high altitudes between 5,000 to 8,000 ft and only occurs naturally in about 65 to 75 disjoint groves (depending on the definition of a grove) with a total area of 36,000 acres. In the northern part of its range (American River, Placer County to Kings River) there are only eight small separate groves, of which three are contained within the borders of Yosemite National Park. However, most of the groves (and the largest ones) occur along a 70 mile long band between the Kings River and Deer Creek Grove in the south, with most of the groves in Sequoia & Kings Canyon National Park and in the Giant Sequoia National Monument. The groves vary in size between forests with 20,000 giant sequoias to small stands with only 6 living specimens. © National Park Service Quite a lot of these trees have been logged since the discovery of these forests. To keep the few remaining stands safe for the future, most of the groves are now contained within the National Parks of the US and or the State Parks of California. Of course they cannot be be cut down there but also outside of the parks, logging of giant sequoia is prohibited by law.

Prescribed burns in the park: The parks have been performing prescribed burns in the Giant Forest area since 1979. By working with the area’s historical fire return interval, which is ten to sixteen years, the parks are ensuring a diverse mosaic of fire history, which is a natural part of the ecosystem, and makes the area less vulnerable to catastrophic wildfire. Prescribed burns also promote the regeneration of giant sequoias by creating openings in the canopy, clearing the forest floor, and opening the cones, allowing seeds to disperse.