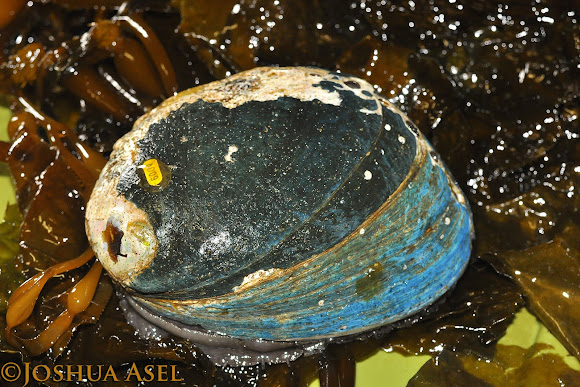 Black abalone were once the most abundant large shellfish clinging to the rocks of intertidal zones between Baja and Oregon. A savored delicacy for sea otters and native coastal people alike, these hard-shelled marine snails were prized for the iridescent colors and the occasional pearl found inside their shells. Like most other species of abalone native to coastal California, black abalone have been decimated by seafood enthusiasts and the fisheries that fill their plates. Three years after Center petitioned for federal protection of the black abalone, in January 2009 the National Marine Fisheries Service declared the species officially endangered under the Endangered Species Act. In 2011, as a result of a Center lawsuit, the agency announced protection for 140 square miles of critical habitat for the species.

Thanks once again to the UC Davis Bodega Marine Lab, I got to photograph another Endangered species. I was really surprised when they pulled out the abalone. Although they are somewhat black, the striking blue color is what stands out the most, begging the question, why aren't they called blue abalone? One biologist told me the color corresponds to their actual bodies, which makes more sense to me, but I had the other biologist who pulled them out tell me it mostly doesn't have to do with that so... I don't know but regardless, it was awesome :)

I think you are very luck, in a way it's a good thing that they are limiting the accessibility, for the sustenance of the species. Thank you so much for sharing all these rare wonders.

Thank you namitha :) Yeah thankfully BML let me see this species of abalone or else I don't think I ever would have seen one!

Beautiful shellfish, sad to here that it is endangered. I have seen many bivalves and gastropods in real life, but, have never seen a univalve like this.
I have a similar shell, in my collection [which my dad brought for me, when he visited Korea]. But, this is just amazing.