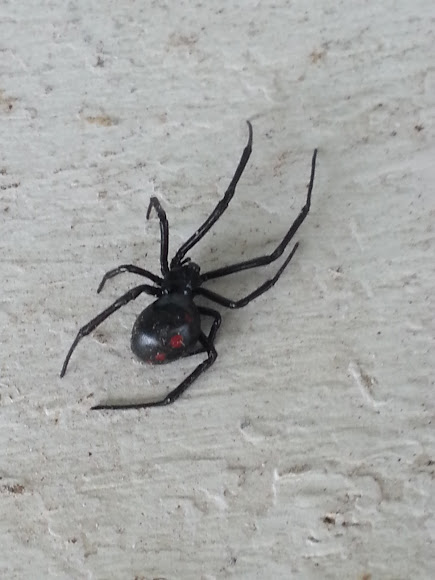 Latrodectus mactans, or Southern black widow or simply black widow, is a highly venomous species of spider in the genus Latrodectus. They are well known for the distinctive black and red coloring of the female of the species and for the fact that she will occasionally eat her mate after reproduction. The species is native to North America. The venom is seldom fatal to healthy humans The mature female is around 1.5 in (38 mm) long and 0.25 in (6.4 mm) in diameter.[5] She is shiny and black in color, with a red marking in the shape of an hourglass on the ventral (under) side of her very rounded abdomen.[6] There is much variation in female size, particularly in egg-carrying (gravid) females. The abdomen of a gravid female can be more than 0.5 in (~1.25 cm) in diameter. Many female widows also have an orange or red patch just above the spinnerets on the top of the abdomen.[7] The male is either black, or closer to the appearance of the juveniles in color, and is much smaller with a body of less than 1/4 inch (< 0.75 cm). Juveniles have a distinctly different appearance to the adults, the abdomen is grayish to black with white stripes running across it and is spotted with yellow and orange

It is interesting how these widows have their red markings located in different spots. I've seen stripes across the back, hour glass on the lower abdomen, and red on the back. Why are they different? Evolution?
I have a lot of black widows in my yard and garage. I live in northern California. I have grown quite fond of them as they keep the insect population down and don't bother me if I don't bother them. My brother works for http://santarosaexterminators.com and he is always trying to come over and remove them. I always say they have as much right to be here as we do. That's my opinion and I am sticking to it!

Please put the name of the park where you spotted this in the "Notes" section. Thank you.