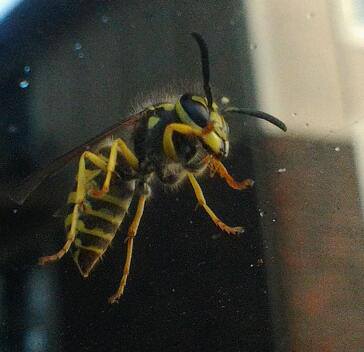 Face of a southern yellowjacket (Vespula squamosa)Yellow jackets are sometimes mistakenly called "bees" or more often "meat bees," as they are similar in size and appearance and both sting, but they are actually wasps. Yellow jackets may be confused with other wasps, such as hornets and paper wasps. Polistes dominula, a species of paper wasp, is very frequently misidentified as a yellow jacket. A typical yellow jacket worker is about 12 mm/0.5in long, with alternating bands on the abdomen; the queen is larger, about 19 mm/0.75in long (the different patterns on their abdomens help separate various species). Workers are sometimes confused with honey bees, especially when flying in and out of their nests. Yellow jackets, in contrast to honey bees, are not covered with tan-brown dense hair on their bodies, they do not carry pollen, and do not have the flattened hairy hind legs used to carry it. Yellowjacket stinger in its sheath in the scanning electron microscopeThese species have lance-like stingers with small barbs, and typically sting repeatedly,[1] though occasionally a stinger becomes lodged and pulls free of the wasp's body; the venom, like most bee and wasp venoms, is primarily only dangerous to humans who are allergic or are stung many times. All species have yellow or white on their faces. The mouthparts are well-developed with strong mandibles for capturing and chewing insects, with probosces for sucking nectar, fruit, and other juices. Yellow jackets build nests in trees, shrubs, or in protected places such as inside man-made structures, or in soil cavities, mouse burrows, etc. They build them from wood fiber they chew into a paper-like pulp. Many other insects exhibit protective mimicry of aggressive, stinging yellow jackets; in addition to numerous bees and wasps (Müllerian mimicry), the list includes some flies, moths, and beetles (Batesian mimicry). Yellow jackets' closest relatives, the hornets, closely resemble them, but have larger heads, seen especially in the large distance from the eyes to the back of the head.

Dolichovespula species such as the aerial yellow jacket, Dolichovespula arenaria, and the bald-faced hornet, tend to create exposed aerial nests. This is a feature shared with some true hornets, which has led to some naming confusion.

Yellow jackets are social hunters living in colonies containing workers, queens, and males. Colonies are annual with only inseminated queens overwintering. Fertilized queens are found in protected places such as hollow logs, in stumps, under bark, in leaf litter, in soil cavities, and man-made structures. Queens emerge during the warm days of late spring or early summer, select a nest site, and build a small paper nest in which they lay eggs. After eggs hatch from the 30 to 50 brood cells, the queen feeds the young larvae for about 18 to 20 days. After that, the workers in the colony will take over caring for the larvae, feeding them with chewed up food, meat or fruit. Larvae pupate, then emerge later as small, infertile females called workers. By midsummer, the first adult workers emerge and assume the tasks of nest expansion, foraging for food, care of the queen and larvae, and colony defense.

Nice close-up! I've stepped on a nest of yellow jackets once. Their sting hurts...