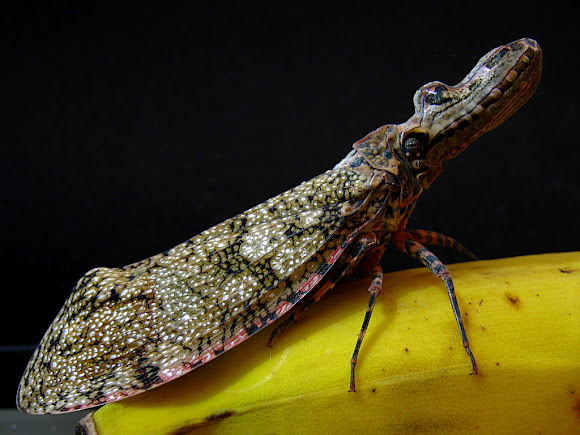 From Wikipedia: The fulgorid insect Fulgora laternaria (often misspelled "lanternaria"), is a Central and South American planthopper known by a large variety of common names including lantern fly, peanut bug, peanut-headed lanternfly, alligator bug, machaca, chicharra-machacuy, cocoposa (in Spain) and jequitiranaboia (the latter terms used in the Amazon region and elsewhere in Brazil) and Bolivia. It is as long as 3 inches, has a protuberance at its head that resembles that of a lizard or a serpent, and which was originally - and falsely - believed to be luminescent. It protects itself by displaying fake eyes on its wings, and perhaps with its quite unusual head. A very similar species, Fulgora lampetis shares much of the same range within South America, and many museum and commercial specimens identified as laternaria are actually this species. Though almost indistinguishable, F. lampetis has slightly more vibrant coloration, and a more swollen head protuberance when viewed from above. In several countries, such as Ecuador, Colombia and Venezuela, there exists the myth that if somebody is bitten by the machaca, he or she must have sex within 24 hours to prevent an otherwise incurable death. The popular belief in Bolivia (Santa Cruz de la Sierra) is that it is a dangerous insect dependant on its wing colours but the insect is actually harmless to people.

There are many legends here in my area (rural Brazil) regarding this animal. When people find one, all they want most is to stay away from it. They usually call it a winged snake, baby dragon, etc. I also found this in my house, in the morning. It was about 12 cm in length.

Nice one, Leonardo... thanks for your comment on my spotting.

RiekoS, Mayra, Karen... Thank you so much, friends! Karen, nice!!! Thank you for this interesting information!!

Fun fact! Lanternfies were so named because early scientists, including the founder of modern taxonomy Carl Linneus, erroneously believed that their inflated snouts, the so-called lanterns, lit up at night. https://www.facebook.com/photo.php?fbid=...

I have never seen this one either... Thank you for posting.

Thank you so much, S Frazier!! I think I was very elated and I'm extrapolating my skills. :) I'll take a break from posting new species for now, while I organize the information from what I've posted. Thanks for the advice, friend. I'll go give it a read in the FAQ as well. Have a nice weekend!

Fantastic, Leonardo. Since you advised me you are new to Project Noah, may I invite you to read the Frequently Asked Questions of the site http://www.projectnoah.org/faq ? There's a lot of helpful information there. One thing that many users don't realize is that for Habitat, the spotter should describe the habitat that pertains to the actual spotting. "Habitat: Please state the actual habitat where you photographed the spotting - this information can then be used to track changes in habitat, such as those caused by human intervention or habitat destruction. Again, it is not necessary to state published habitat information here, this can be referenced in the 'reference links' box." Very specific information -- like where you spotted it, and what it was like there -- adds scientific value to your spotting and only you can add that. You did note that you found it in your house. You might also describe the habitat that surrounds your house too, and put all that kind of information in the Habitat space. Cheers :-)