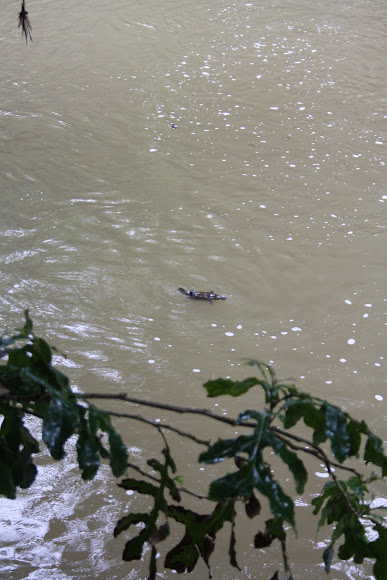 The platypus (Ornithorhynchus anatinus) is a semiaquatic mammal endemic to eastern Australia, including Tasmania. Together with the four species of echidna, it is one of the five extant species of monotremes, the only mammals that lay eggs instead of giving birth. It is the sole living representative of its family (Ornithorhynchidae) and genus (Ornithorhynchus), though a number of related species have been found in the fossil record. The unusual appearance of this egg-laying, duck-billed, beaver-tailed, otter-footed mammal baffled European naturalists when they first encountered it, with some considering it an elaborate fraud. It is one of the few venomous mammals, the male platypus having a spur on the hind foot that delivers a venom capable of causing severe pain to humans. The unique features of the platypus make it an important subject in the study of evolutionary biology and a recognisable and iconic symbol of Australia; it has appeared as a mascot at national events and is featured on the reverse of its 20-cent coin. The platypus is the animal emblem of the state of New South Wales. Until the early 20th century, it was hunted for its fur, but it is now protected throughout its range. Although captive breeding programmes have had only limited success and the platypus is vulnerable to the effects of pollution, it is not under any immediate threat.

Haha, I guess they are not patient enough :) First time I just wanted to see one so badly I sad there almost all day. This one is my second and it showed up after only one hour :D

So lucky to see it. Even most Aussies never see one in the wild.