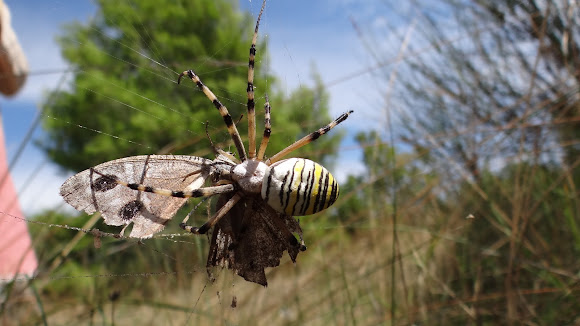 In North America, Argiope aurantia is commonly known as the black and yellow garden spider, zipper spider, corn spider, and writing spider, because of the similarity of the web stabilimenta to writing. In England, Argiope bruennichi, where it is found only on the southern coast, and in other parts of Europe, including Germany, is also known as the wasp spider. The East Asian species Argiope amoena is known in Japan as kogane-gumo. In Australia, Argiope keyserlingi and A. aetherea are known as St. Andrew's Cross spiders, for their habit of resting in the web with legs outstretched in the shape of an X, the cross of St. Andrew. The large white zigzag in the centre of its web is called the stabilimentum or web decoration. In the Philippines, it is known as gagambang ekis, which translates to X spider. Some regions call them gagambang pari, which translates to priest spider.

I am not sure what species you have in Croatia but this is an Argiope species.