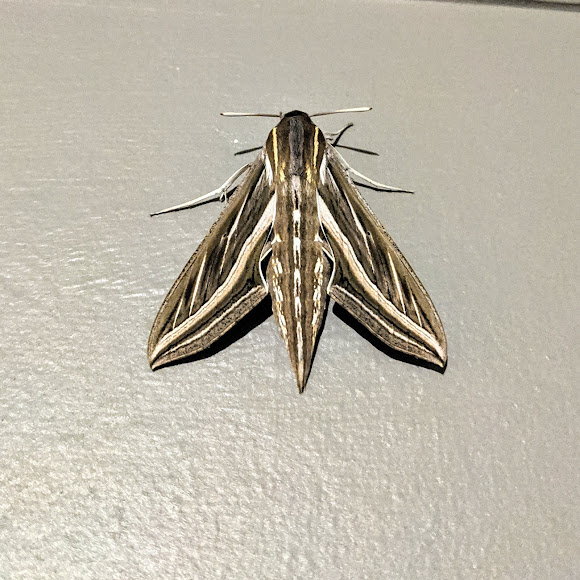 This female measured almost 2" in length and was very friendly unless a smaller moth flew too close. According to Wikipedia, the forewing is typically 28–35 millimetres (1.1–1.4 in) long. The female is distinguishable by a pinkish colour to the hindwings which can be see in the image where she is perched on my grey t-shirt (a tinge can be seen). Plus, the female underside is much lighter than the male (as can be seen in the image of her belly).

They can only persist in warm climates so they are restricted to the southern hemisphere, preferring open coastal regions (tropics) and can be found almost worldwide except the Americas. Hippotion celerio is a migratory insect belonging to the Hawkmoth family (Sphingidae). They're a frequent garden visitor, generally being attracted to open habitats. These moths are nectar feeders as adults, providing pollination services for the garden. It feeds on ornamental plants and crops like Frangipani, Sweet Potato, Fuchsias, Rhubarb, and Grape Vines.

The pheromones of this species have been identified. The moth is agriculturally important as it is one of several species largely responsible for the pollination of Papaya (Chamaedorea tepejilote).