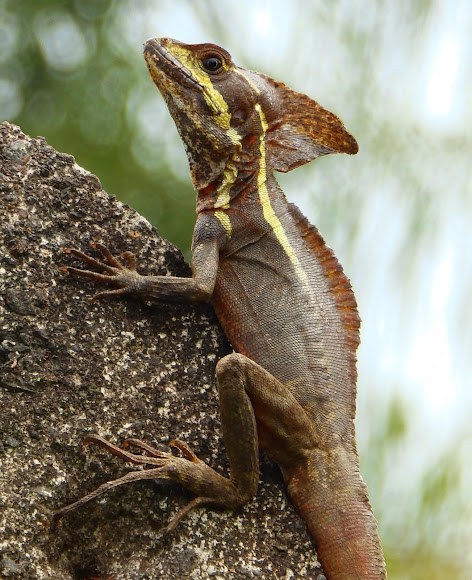 The common basilisk can be distinguished from similar species within its range by its large size and the high fin-like crests down its back. Males also have high crests on their heads and tails. Both sexes are brown to olive, and have a white, cream or yellow stripe on the upper lip and a second stripe along either side of their bodies; these stripes have higher contrast in juveniles and fade as the lizards age. Adults can grow up to two and a half feet long. They have been known to run up to 7 mph (11 km/h). While the basilisk is most known for its ability to run on water, it is also an excellent climber and swimmer; the basilisk has been known to stay under water for up to half an hour.

Such a great series once again Marta! :)

Thanks for liking the basilisk, people! :-)
@Maria: No, I had no idea and actually I am getting surprised myself! At first I calculated that I had seen around 100 species but I was wrong because I am still showing half trip spottings and I am already by more than 200 spottings! A few are repeated species seen in different places or to show the sexual dimorphism..but still, I am very happy and looking forward to the total count of species for this trip. A few are excluded because of the bad quality of the pictures so I could even have more :-)

Very nice portrait, Marta! Any idea how many species of animals you saw during your recent trip?