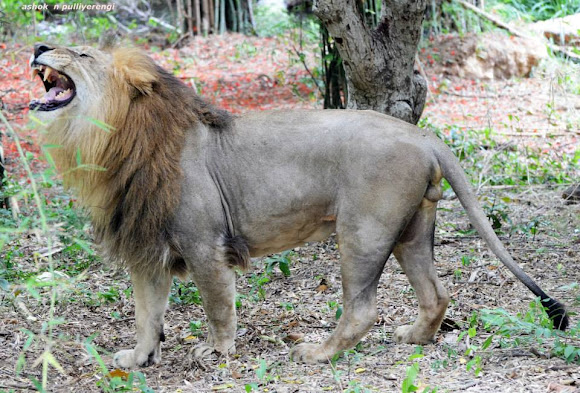 with only 400 in the wild , so when the Majestic but rare Asiatic Lion sat on the metal road he held his ground ,sensing the tension lioness lead him away ...so what ails the rare Asiatic lions of Saurashtra's Gir forest and why they stray out of their only habitat in the world...Usually a single adult lion requires grassland of about, say, 25 sq km to live and roam comfortably. Wildlife experts familiar with the geography of Gir believe its forests cannot provide shelter to more than 200 lions, all factors considered. (And one is not even talking about other big cats, particularly leopards, which are already there in a larger number to accompany the lions.)Consequently they tend to step out of what is their only habitat in the world and explore hamlets and villages on the periphery of Gir in search of preys, much to the chagrin of their inhabitants, who are concerned not only about their own lives but also their livestock, and to the delight of poachers. As if that was not enough, there is an alarming increase in encroachment in the very heart of Gir. There are at least four major temples in Gir, of which Kankai and Tulshishyam are very famous and remain crowded with hundreds of pilgrims throughout the year, except during the monsoon.Incidents of a lion or two, or even a pride for that matter, straying out of their protected areas and attacking and killing domesticated animals of farmers, shepherds, milkmen and other settlers living on the outskirts of Gir are neither uncommon nor infrequent. (Of late they have started fatally attacking even humans sleeping outside their homes in the dead of night.) In fact, at times the Gir lion is sighted even on the coastal areas of Una, Seemar, Kodinar, Sutrapada, Veraval, and even the stunningly picturesque island of Diu, which is a favourite destination of many a tourist.