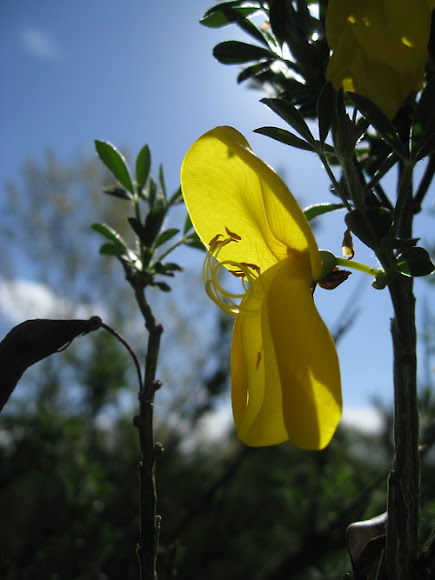 This familiar plant, also known as Scot's Broom, is an invasive flowering shrub that grows commonly throughout the Puget Sound region. Originally introduced from Europe as an ornamental and for erosion control, it is highly aggressive and forms dense, monotypic stands which reduce wildlife habitat and hinder revegetation of upland sites and wetland buffers. Scotch broom is loosely branched with green, slender ribbed branches and small, simple leaves up to half an inch long. It grows from 3 to 10 feet in height. The bright yellow flowers are pea-like, about three-quarters of an inch long. Its seed is borne in dark brown to black hairy, flattened pea-like pods, which when ripe, burst and scatter seeds for yards. Scotch broom grows primarily in open, dry meadows and along roadsides. It is often confused with Spanish broom, which looks similar but is easily distinguished by its rounded, bright green stems, fragrant blossoms, and later flowering time.

These shrubs commonly grow in disturbed areas and along utility and transportation rights-of-way.

Scotch Broom is an invasive species of plant. The prolific growth of this species after timber harvest inhibits reforestation by competing with seedling trees. It is estimated that it is responsible for US$47 million in lost timber production each year in Oregon.