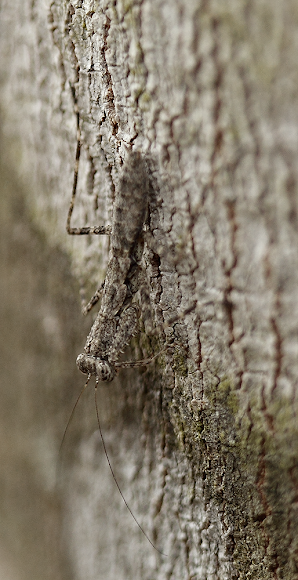 In my rubber-plantation, where I spotted the Two-tailed spider, I also spotted this Mantis. I was investigating the bark of that tree, to control the rubber tapping, when I saw something on the bark. Being used to the spiders I did not look well, but when it moved I realized it was not a spider and had a better look. I went to the house and got my camera with macro lens, tried for at least 30 minutes to get shots: either the lens would not focus, as the difference between Mantis and bark was too narrow, or the Mantis decided to move to the other side of the tree.... Anyway, I managed this shot of the what I call Grey Mantis. I'm fascinated by the camouflage features of this insect, absolutely great!

Mark, you can find all kinds of habitat and bio-diversity in Thailand. Be it tropical rainforest, wetlands, mountainous forests, coasts and islands, and the secretive Mekong river area, highly unexplored.
Many National Parks protect habitats and give an excellent opportunity to discover tropical flora and fauna.

It all sounds quite attractive. Maybe I'll get to Thailand one day.

Mark, I differentiate plantation from forest. Plantation is man-made and although it is a source of bio-diversity, the habitat itself used to be open woodland before it became a plantation. It is very interesting though, like I spotted more than 30 bird species in and around my plantation.
The other bio-diversity I find in my "wild" garden. I let grow what grows and that gave me a variety of flora and fauna just around the house. Add to that that my house is the base for many nesting birds, loads of Geckos including the Tokay Gecko, and of course more than a handful of insects.
The third bio-diversity I found just 5 km from home, the forest on a hill. It's a temple forest, meaning no hunting, fishing, trapping, poisoning, resulting in a great bio-diversity. It's quite large and I explore up to 7 different trails until now, and more to come, all about 1-2 hour walk (and back). It's great, I love that forest!

You've got an impressive bunch of wildlife on those rubber trees. Is there 'other' forest around as well or any under-story?