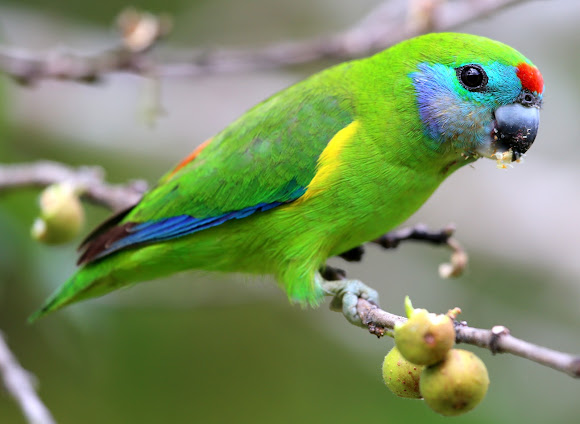 Both sexes have a red forehead, but the males also have a red cheek patch, as opposed to the females' which is usually yellow. The Double-eyed Fig Parrot is 13–16 cm in length and is the smallest Australian parrot.

Diet: Unlike many larger parrots, fig parrots feed very quietly on the kernels of many tiny seeds, including those of figs, buttonwood and ironwood. In flight, they are small green round undulating rockets, with the blue in the primaries of their wings sometimes visible. When seen feeding in foliage, they are a lovely green with yellow wash on the wings and, most distinctively, red patches above and below the eyes, resulting in the common name of 'double eyed'. They have a very high pitched and vaguely metallic 'zeet ..zeet' call when flying overhead, and are often heard around even urbanized areas, such as Cairns. However, once they stop to feed, they are usually quiet and rarely seen due to their diminutive size. They do indeed feed mainly on figs, but also eat other fruits and will also take nectar. Unlike almost all other parrots in Australia that generally use existing holes in trees for nests, fig parrots actually excavate their own next, usually in a rotting trunk . Fig Parrots are found mainly around figs in tropical rainforest in three very distinctly separated populations along the east coast of Australia, as well as New Guinea. They will also visit figs and other fruiting trees in adjacent woodlands and even urban areas.

Thanks Leanne, they are adorable & quite small too

Adorable bird Mac. I'd love to see one of these :)