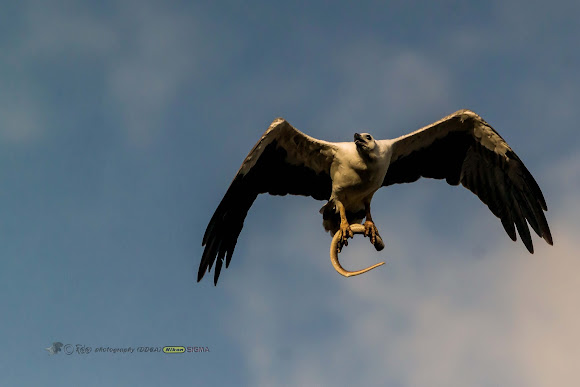 The white-bellied sea eagle (Haliaeetus leucogaster), also known as the white-breasted sea eagle, is a large diurnal bird of prey in the family Accipitridae. It is closely related to Sanford's sea eagle of the Solomon Islands, and the two are considered a superspecies. A distinctive bird, the adult white-bellied sea eagle has a white head, breast, under-wing coverts and tail. The upper parts are grey and the black under-wing flight feathers contrast with the white coverts. Resident from Sri Lanka and India through Southeast Asia to Australia on coasts and major waterways, the white-bellied sea eagle breeds and hunts near water, and fish form around half of its diet. Opportunistic, Human disturbance to its habitat is the main threat, both from direct human activity near nests which impacts on breeding success, and from removal of suitable trees for nesting. The white-bellied sea eagle is revered by indigenous people in many parts of Australia, and is the subject of various folk tales throughout its range.

The white-bellied sea eagle is found regularly from eastwards in Sri Lanka, India, Bangladesh, and in southern Asia. They are a common sight in coastal areas, but may also be seen well inland The white-bellied sea eagle is generally sedentary and territorial, although it may travel long distances. They have been reported travelling upriver to hunt for flying foxes. The species is easily disturbed by humans, especially when nesting, and may desert nesting sites as a result. It is found in greater numbers in areas with little or no human impact or interference