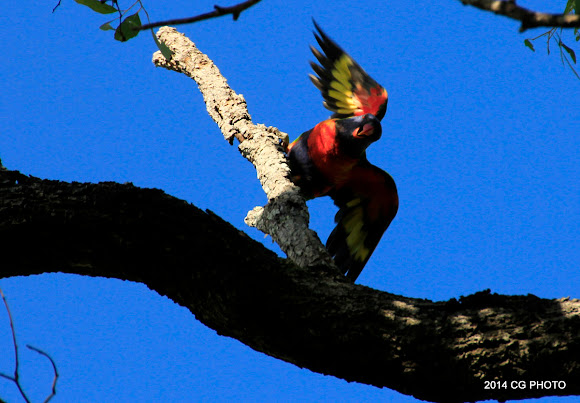 The Rainbow Lorikeet is unmistakable with its bright red beak and colourful plumage. Both sexes look alike, with a blue (mauve) head and belly, green wings, tail and back, and an orange/yellow breast. They are often seen in loud and fast-moving flocks, or in communal roosts at dusk. Similar species: Rainbow Lorikeets are such colourful parrots that it is hard to mistake them for other species. The related Scaly-breasted Lorikeet is similar in size and shape, but can be distinguished by its all-green head and body. They are often found together..

Living with us The Rainbow Lorikeet appears to have benefited from artificial feeding stations and prolific-fruiting and flowering trees and shrubs.