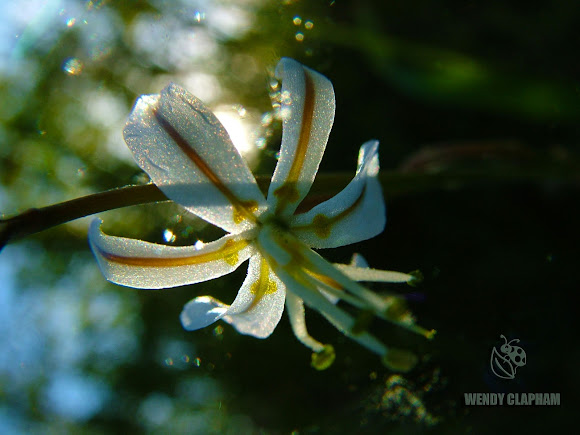 Trachyandra ciliata is an upright to sprawling herbaceous perennial up to 0.5 m heigh. Roots are wiry, often swollen and hairy. Leaves are linear, up to 100 cm x 4 cm, succulent, hairless or sometimes with hairs along the margins. Flowers are arranged into congested racemes, each lasting only a single day, tepals are white with a pink midrib and paired yellow spots near the base, usually curved backwards. There are 6 stamens with minutely hairy (scabrid) filaments. The capsule is round or cylindrical, hairless, usually recurved. Seeds are greyish black, sometimes with reddish brown streaking, Trachyandra ciliata flowering stalksand the surface has wart-like protuberances.

Widespread, usually on coastal sands from southern Namibia to the southeastern Cape.

The name Trachyandra is derived from the Greek words, trachy, meaning rough, and andro, meaning male, and refers to the scabrid (hairy) filaments of the stamens. There are ± 55 species that mainly occur in southern Africa, particularly the Western Cape, but some species extend into tropical Africa as far as Somalia. Trachyandra ciliata (ciliatus means finely hairy) is most similar to T. arenicola and T. falcata in the congested inflorescence. It was described by Linnaeus' son from a specimen collected by Carl Thunberg in the 1770s during his expeditions in the Cape. Trachyandra ciliata is used as a vegetable. The flowering stalks are harvested before the flowers open and can be steamed or boiled in much the same way as asparagus, or cooked in a stew. Its use as a vegetable seems only to have been first recorded as recently as 1915 by Rudolph Marloth.