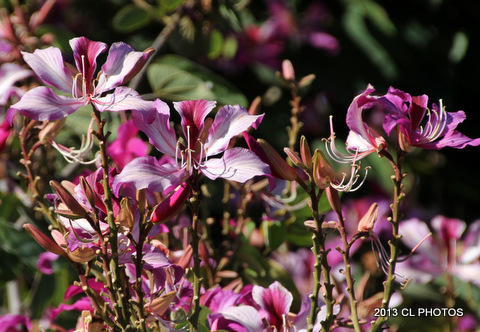 The orchid tree is a medium-sized tree native to a variety of habitats in South Asia, Southeast Asia, southern China, and Japan. Admired for its large, fragrant, and beautiful purple, pink, lavender, red, or blue orchid-like flowers, the orchid tree is also special for its extraordinary seed dispersal ability: it ejects its own seeds as far as 15 meters (49 feet) away from the tree, a possible record. Throughout history, this unusual tree has been particularly valuable to people for medicinal purposes. In countries such as India, Pakistan, and Sri Lanka, various parts of the orchid tree (including the bark, roots, and flowers) have been and continue to be used in traditional medicine as treatments for many ailments, such as ulcers, wounds, swollen glands, and stomach tumors. Ongoing research into the chemical components and medicinal properties of the plant suggests that the orchid tree contains a host of chemicals with, among other benefits, antioxidant, antibacterial, anti-inflammatory, and even cancer-fighting effects. The fruit, seeds, leaves, flowers, and flower buds of the orchid tree are also used as a food source in some cultures, and the seeds have been to shown to have significant nutritional value. In addition, among some other economic uses of the plant, in places such as Nepal the leaves of the orchid tree are used as fodder for domestic animals like sheep, cattle, goats, and buffalo.

Found in the Mackay Botanic Garden...