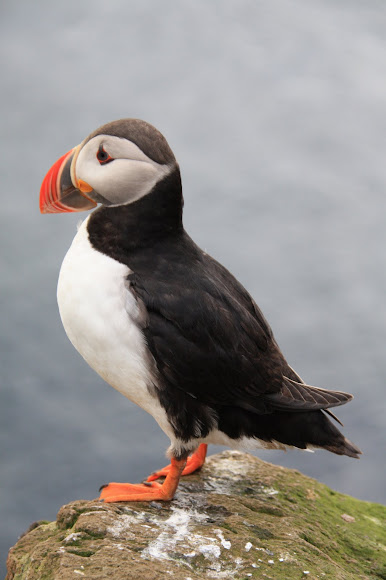 The Atlantic Puffin is 26–29 centimetres (10–11 in) in length (bill 3–4 cm), with a 47–63 centimetres (19–25 in) wingspan. The male is generally slightly larger than the female, but they are coloured alike. This bird is mainly black above and white below, with gray to white cheeks and red-orange legs. The bill is large and triangular, and during the breeding season is bright orange with a patch of blue bordered by yellow at the rear. The characteristic bright orange bill plates grow before the breeding season and are shed after breeding. The bills are used in courtship rituals, such as the pair tapping their bills together. During flight, it appears to have grey round underwings and a white body; it has a direct flight low over the water. The related Horned Puffin (Fratercula corniculata) from the North Pacific looks very similar but has slightly different head ornaments. The Atlantic Puffin is typically silent at sea, except for soft purring sounds it sometimes makes in flight. At the breeding colonies, its commonest call is a trisyllabic kaa-aar-aar and the birds make a short growl when startled.

This species breeds on the coasts of northern Europe, the Faroe Islands, Iceland and eastern North America, from well within the Arctic Circle to northern France and Maine. The winter months are spent at sea far from land - in Europe as far south as the Mediterranean, and in North America to North Carolina. About 95% of the Atlantic puffins in North America breed around Newfoundland's coastlines. The largest puffin colony in the western Atlantic (estimated at more than 260,000 pairs) can be found at the Witless Bay Ecological Reserve, south of St. John's, Newfoundland and Labrador. Puffin viewing has also started to become popular in Elliston Newfoundland, previously named Bird Island Cove, located near Trinity. Here, puffins have been known to be tame enough to get even 2 or 3 feet away from them. Predators of the Atlantic Puffin include the Great Black-backed Gull (Larus marinus), the Great Skua (Stercorarius skua), and similar-sized species, which can catch a puffin in flight, or pick off one separated from the colony. Smaller gull species like the Herring Gull (L. argentatus) which are hardly able to bring down a healthy adult puffin, take eggs or recently hatched chicks, and will also steal fish.

I love the Atlantic Puffin!! Thanks so much for sharing.