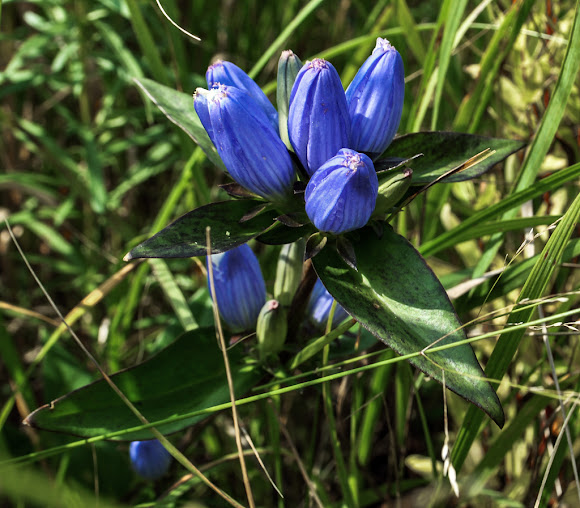 Closed bottle gentian, Gentiana andrewsii, or bottle gentian, is found throughout the northeastern half of the United States and grows in moist, rich soils either in full or partial sun. It can most likely be found in flood plain forests, thickets, fens, or other swampy areas near water. Gentiana andrewsii is a true gentian belonging to Gentianaceae. Gentiana was named after Gentius, the King of Illyria (was a region in the western part of the Balkan Peninsula) who found that the roots of yellow gentian (Gentiana lutea) had a healing effect on his malaria-stricken troops around 500 B.C. There are roughly 400 different species in the Gentian family. Bottle gentian is one of the most common perennial gentians and the easiest to grow in moist wildflower gardens. Bottle gentian is a beautiful, showy wildflower that blooms August through October with 1.5-inch violet, sometimes white, closed terminal cluster flowers. Smaller flowers can be present in the axils of the upper tier of leaves. Only strong bees can force the corolla open in order to get at the nectar and deposit pollen. The plant itself is an erect, 1-3 foot tall forb with a non-branching stem. The leaves are mostly stalkless, lance-shaped with parallel venation, and devoid of hairs. As the leaves move up the stem, they go from being opposite leaves to more of a whorled pattern.