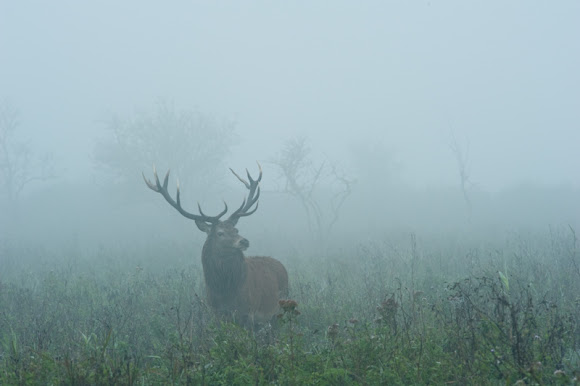 The Red Deer (Cervus elaphus) is one of the largest deer species. Depending on taxonomy, the Red Deer inhabits most of Europe, the Caucasus Mountains region, Asia Minor, parts of western Asia, and central Asia. It also inhabits the Atlas Mountains region between Morocco and Tunisia in northwestern Africa, being the only species of deer to inhabit Africa. Here in a Dutch National park with a mixture of water, forest and open grassland.

That is an incredible picture of an incredible creature. These species of deer are large and are very majestic. Awesome picture to capture the serenity of the life of a deer (until a predator or hunter comes into the picture).

Thank you @Carol Milne and @Telse

Wow, that's one of the best picture of a deer I have ever seen! It's classic as a scene!

Thanks @TKBotting. And did you have red deer in Red Deer?

That's a great shot! I was born in a town called Red Deer (in Alberta, Canada).

@AshishNimkar I will try that thnx :)

Nice spotting! You have a great collection. Glad to be following you now!

@777joshleon Thanks! Although not forever, I spend at least half an hour watching. Since I did I was lucky enough to find out this stag was not alone: http://www.projectnoah.org/spottings/602...

I've always wanted to hunt....I think I've changed my mind. Unless I'm hunting for survival, I want to respect God's creations. SO BEAUTIFUL!!! I could have stood there forever just staring at it's beauty.

Will do, picture still in the camera

and 240 other people favorited this spotting