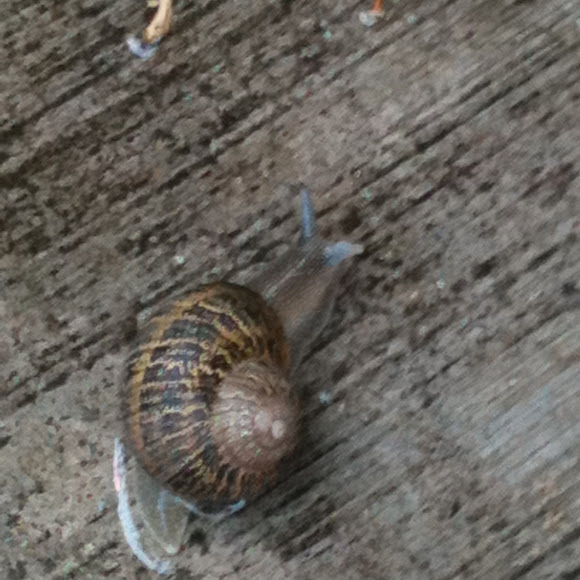 The adult bears a hard, thin calcareous shell 25–40 mm in diameter and 25–35 mm high, with four or five whorls. The shell is somewhat variable in color and shade but is generally dark brown or chestnut with yellow stripes, flecks, or streaks. The body is soft and slimy, brownish-grey, and is retracted entirely into the shell when the animal is inactive or threatened. During dry and cold weather, the aperture of the shell is sealed with a thin membrane of dried mucus which is known as an epiphragm, which helps the snail retain moisture. The resultant quiescent periods are known as aestivation and hibernation respectively. When hibernating, Helix aspersa avoids ice formation by altering the osmotic components of its blood (or haemolymph), and can survive temperatures as low as -5°C.[23] During aestivation, the mantle collar has the unique ability to change its permeability to water.[24] In combination with an osmoregulatory mechanism similar to that seen during hibernation this allows Helix aspersa to survive several months of aestivation. During times of activity the head and foot emerge. The head bears four tentacles, the upper two of which have eye-like light sensors, and the lower two of which are smaller, tactile and olfactory sensory structures. The tentacles can be retracted into the head. The mouth is located beneath the tentacles, and contains a chitinous radula which the snail uses to scrape and manipulate food particles.

The garden snail is a herbivore and has a wide range of host plants (It feeds on plants only). It feeds on numerous types of fruit trees, vegetable crops, garden flowers, and cereals. It is a food source for many other animals, including small mammals, many bird species, lizards, frogs, centipedes, predatory insects, and predatory terrestrial snails. Helix aspersa can be used as an indicator of environmental contamination, as its shell acts as a site for deposition of toxic heavy metals, such as lead.

Like other Pulmonata, Helix aspersa is a hermaphrodite, producing both male and female gametes. Reproduction is usually sexual, although self-fertilisation can occur.[30] During a mating session of several hours, two snails exchange sperm. The garden snail uses love darts during mating. After about two weeks approximately 80 spherical pearly-white eggs are laid into crevices in the topsoil. Up to six batches of 80 eggs can be laid in a year.[31] The size of the egg is 4 mm. The young snails take one to two years to reach maturity.

I've moved this snail from the Arthropod category to the Other category for you. Snails and slugs are Mollusks. Arthropods have an exoskeleton and jointed limbs in at least one phase of their life. Think dragonfly, bee, crab, and ant.