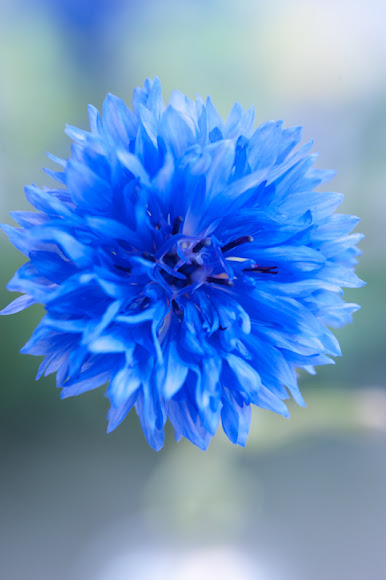 It is an annual plant growing to 16-35 inches tall, with grey-green branched stems. The leaves are lanceolate, 1–4 cm long. The flowers are most commonly an intense blue colour, produced in flowerheads (capitula) 1.5–3 cm diameter, with a ring of a few large, spreading ray florets surrounding a central cluster of disc florets. The blue pigment is protocyanin, which in roses is red. In the past it often grew as a weed in crop fields, hence its name (fields growing grains such as wheat, barley, rye, or oats are sometimes known as corn fields in the UK). It is now endangered in its native habitat by agricultural intensification, particularly over-use of herbicides, destroying its habitat; in the United Kingdom it has declined from 264 sites to just 3 sites in the last 50 years. In reaction to this, the conservation charity Plantlife named it as one of 101 species it would actively work to bring 'Back from the Brink'. It is also, however, through introduction as an ornamental plant in gardens and a seed contaminant in crop seeds, now naturalised in many other parts of the world, including North America and parts of Australia.

Wild grassland near the dunes

Thanks! Check this Skullcap, another great blue flower I spotted recently: http://www.projectnoah.org/spottings/710...

Gorgeous picture! I love the color!

My favorite shades of blue.