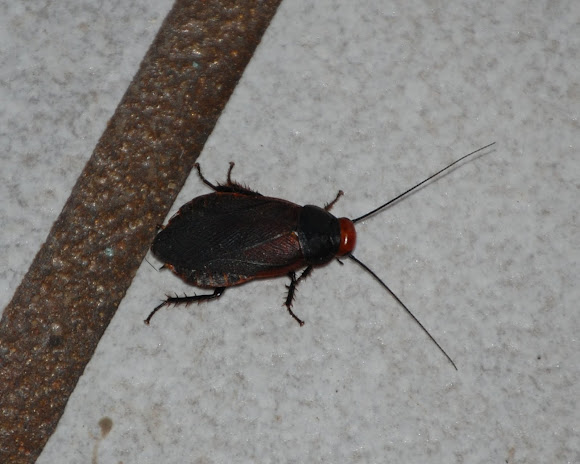 Black with a reddish-brown head cockroach found entering my house but were soon removed from the house after its photoshoot! Cockroaches are insects of the order Blattaria or Blattodea. The name cockroach comes from the Spanish word cucaracha, chafer, beetle, from cuca "kind of caterpillar." Cockroaches are one of the most commonly noted household pest insects. They feed on human and pet food, and can leave an offensive odor. They can also passively transport microbes on their body surfaces including those that are potentially dangerous to humans, particularly in environments such as hospitals. Cockroaches have been shown to be linked with allergic reactions in humans. One of the proteins that triggers allergic reactions has been identified as tropomyosin. These allergens have also been found to be linked with asthma. Some cockroaches have been known to live up to three months without food and a month without water. Frequently living outdoors, although preferring warm climates and considered "cold intolerant," they are resilient enough to survive occasional freezing temperatures. This makes them difficult to eradicate once they have infested an area.

Cockroaches live in a wide range of environments around the world. Pest species of cockroaches adapt readily to a variety of environments, but prefer warm conditions found within buildings. Many tropical species prefer even warmer environments and do not fare well in the average household.