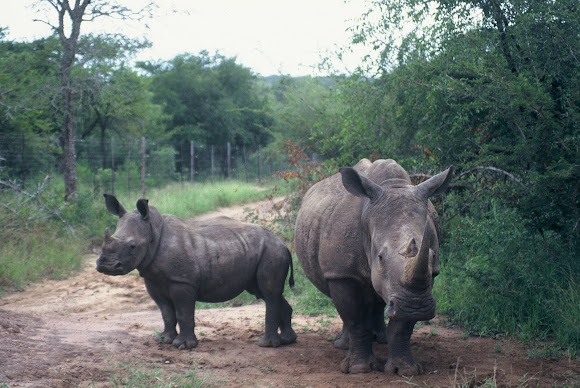 The White Rhinoceros or Square-lipped rhinoceros (Ceratotherium simum) is one of the five species of rhinoceros that still exist and is one of the few megafaunal species left. It has a wide mouth used for grazing and is the most social of all rhino species. The White Rhino consists of two subspecies: the Southern White Rhino, with an estimated 17,480 wild-living animals at the end of 2007 (IUCN 2008), and the much rarer Northern White Rhino. The northern subspecies may have eight remaining worldwide — all in captivity.[3]

White Rhinoceroses are found in grassland and savannah habitat. Herbivore grazers that eat grass, preferring the shortest grains, the White Rhinoceros is one of the largest pure grazers. It drinks twice a day if water is available, but if conditions are dry it can live four or five days without water. It spends about half of the day eating, one third resting, and the rest of the day doing various other things. White Rhinoceroses, like all species of rhinoceros, love wallowing in mudholes to cool down.

White Rhinoceroses produce sounds which include a panting contact call, grunts and snorts during courtship, squeals of distress, and deep bellows or growls when threatened. Threat displays (in males mostly) include wiping its horn on the ground and a head-low posture with ears back, combined with snarl threats and shrieking if attacked. The White Rhinoceros is quick and agile and can run 50 km/h (31 mph). White Rhinoceroses live in crashes or herds of up to 14 animals (usually mostly female). Sub-adult males will congregate, often in association with an adult female. Most adult bulls are solitary. Dominant bulls mark their territory with excrement and urine. The dung is laid in well defined piles. It may have 20 to 30 of these piles to alert passing rhinoceroses that it is his territory. Another way of marking their territory is wiping his horns on bushes or the ground and scrapes with its feet before urine spraying. They do this around 10 times an hour while patrolling territory. The same ritual as urine marking except without spraying is also commonly used. The territorial male will scrape-mark every 30 m (98 ft) or so around its territory boundary. Subordinate males do not mark territory. The most serious fights break out over mating rights over a female. Female territory is overlapped extensively and they do not defend it.

Ha ha ha - funny - I would love for a poacher to head out there in Japan and find Nothing! Thank you Philippa!

Hi Smith's Zoo - I just changed it from you know where to "in the bush"... and the google map plonked me in South Japan!! I'll remove the relevant tags too.

Friendly reminder to all Rhino spots in wild - please NO EXACT CO-ORDINATES in order to keep this magnificent animal safe.

Hi Philippa, I think sending ones hair is extreme, but I also think it is time for extreme measures! You just let me know where and when! Happy World Rhino Day!!

"Awareness of the Chinese population on the ineffectiveness of the pharmacological properties of rhino horn would be the ultimate solution." In the spirit of Hubert the Lion (a children's book from way back when) who was haughty and vain and mightily proud of his elegant mane... I want to go back to my idea of presenting the Chinese and Vietnamese govt's with many, many plaits of HAIR. Thin plaits, donated from all around South Africa and even the world. This will surely assist with the raising of awareness? - "Have my Hair, not my Rhino Horn" - Hubert's Hair-raising Adventure! We've got to do something... are you with me?

Ag man, this is heart breaking! Thank you for the link. We just have to keep on fighting the good fight!

These seem to be the closest to me in Swellendam. Historically I cannot say for sure, but there must have been more...

2 rhinos dehorned in Western Cape | News24
http://www.news24.com/SouthAfrica/News/2...
Cape Town - Two rhinos were darted and dehorned at Fairy Glen Private Game Reserve in Worcester, near Cape Town, according to a news report on Monday.

Both survived the attack by a gang of poachers, but one of them had to have an abortion due to the strain the attack put on her body, the Cape Times newspaper reported.

The rhinos had been darted with an overdose of M99, a morphine drug, and their horns were hacked off with pangas.

A Worcester hospital was able to provide an antidote for the drug and vet Roland Bellstedt was attending to the mutilated rhino.

The darts were sent for forensic analysis in the hope of apprehending the poachers. De Jager said it was difficult to defend the animals.

"Aside from sleeping next to my animals at night, guarding them in the bush, there is nothing I can do.

"The poachers are well-trained armed criminals," he said.

Hi Philippa, that is a great idea! I will definitely share the info!
When you say no Rhino's left in your area, do you mean they have all
been murdered, and there are none left? or moved for safety reasons?

Hi Smith's Zoo
It is a pleasure to be part of your mission, unfortunately there are no rhino's left in our area of Swellendam... What we can help with down here is promoting Rhino Conservation with the walks, from time to time, as well as assisting website owners with having Mobile Friendly webpages, viewable and usable on all makes of mobile phone, thereby increasing awareness and making it easy for any user to offer contributions to such conservation efforts.
See www.mobi4u.co.za for more info.

Thank you Philippa for raising awareness by joining the mission! Hope you spot more Rhino's soon to share with us!

Majestic animal! Please add your amazing pics to "Rhino Horn is Not Medicine" mission to help raise awareness! Swaziland is so small and surrounded by South Africa, I thought you might be close enough to join the mission.
http://www.projectnoah.org/missions/1284...