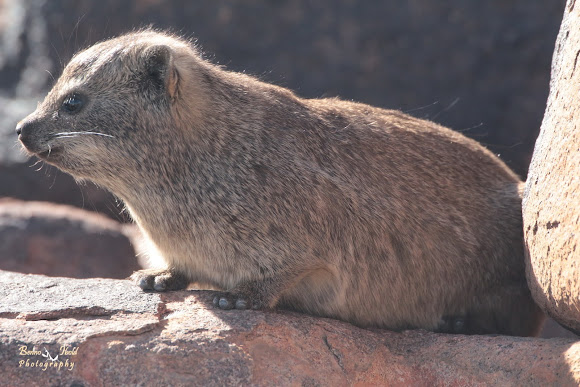 The rock hyrax is squat and heavily built, adults reaching a length of 50 cm (20 in) and weighing around 4 kg (8.8 lb), with a slight sexual dimorphism, males being approximately 10% heavier than females. Their fur is thick and grey-brown, although this varies strongly between different environments: from dark brown in wetter habitats, to light gray in desert living individuals. Hyrax size (as measured by skull length and humerus diameter) is correlated to precipitation, probably because of the effect on preferred hyrax forage. Prominent in and apparently unique to hyraxes is the dorsal gland, which excretes an odour used for social communication and territorial marking. The gland is most clearly visible in dominant males. The head of the rock hyrax is pointed, having a short neck with rounded ears. They have long black whiskers on their muzzles. The rock hyrax has a prominent pair of long, pointed tusk-like upper incisors which are reminiscent of the elephant, to which the hyrax is distantly related. The forefeet are plantigrade, and the hindfeet semi-digitigrade. The soles of the feet have large, soft pads that are kept moist with sweat-like secretions. In males, the testes are permanently abdominal, another anatomical feature that hyraxes share with their relatives elephants and sirenians.

Pictures are taken in rocky thornbush savannah. The rock hyrax occurs across sub-Saharan Africa, with the exception of the Congo basin and Madagascar. A larger, longer-haired subspecies is abundant in the glacial moraines in the alpine zone of Mount Kenya. The distribution continues into northern Algeria, Libya and Egypt, and the Middle East, with populations in Israel, Jordan, Syria, the Arabian peninsula and eastern Turkey.